I’m not sure if I’m doing things right, but I have perhaps a feature request for RMX Scaler. I’ve been using the ‘copy values’ option to generate derived forms with consistent settings. However, I notice that if I copy-paste Bezier curves or characters in the edit view, the same clipboard is used and my settings can no longer be pasted as the values have been overwritten by the Beziers or other characters.

My workflow is rarely linear or logical, which means I’m often adding new glyphs or regenerating derived glyphs from updated base glyphs. Unfortunately I can’t see a way within Glyphs to remember the particular settings I need, when, for example, I want to make a smallcap version of a new glyph.

What I’m doing presently is screencapping the RMX Scaler dialogue box and giving the screencap a filename such as ‘smallcaps’, ‘superscript Latin letters’ or ‘Burmese subjoined consonants’ so that I have a record of the settings, as in this image:

I know this seems like a silly way of doing things. Would there be a possibility to store particular, named, settings, so that we could click a menu entry for the smallcap settings or the Burmese subjoined consonant settings, instead?

That would be a nice addition. I actually do the same thing with the screenshots!

Did you know that the RMX Scaler values are copied to the clipboard as text-only json data? As it says in the PDF manual, this allows you to store them in a text file, send them as an email etc.

I often paste the values into a plain text document (in my favourite text editor) – if it is a major design step I keep it as a .txt file for my records, or I just leave the document open so I can copy from there as needed.

The text could optionally be saved in Font Info > Notes.

I see. I think I must have an older version of the RMX tools as my Scaler interface looks like the above, not like this box that’s shown in the manual:

I don’t have the option to save, how can I get the version shown?

Oh, that seems to be the FontLab version, sorry.

What I was hoping for was a way to store the values within Glyphs so that it can populate the Scaler settings without copy-paste. A separate text file doesn’t seem to be much more help than saving a separate screenshot of the values.

It is, because from a text file the settings can be copied and then pasted en masse into the plugin, whereas screenshot numbers would have to be re-entered individually.

Earlier beta versions of RMX for Glyphs had a preset feature, a bit like in GarageBand, which looked like this: 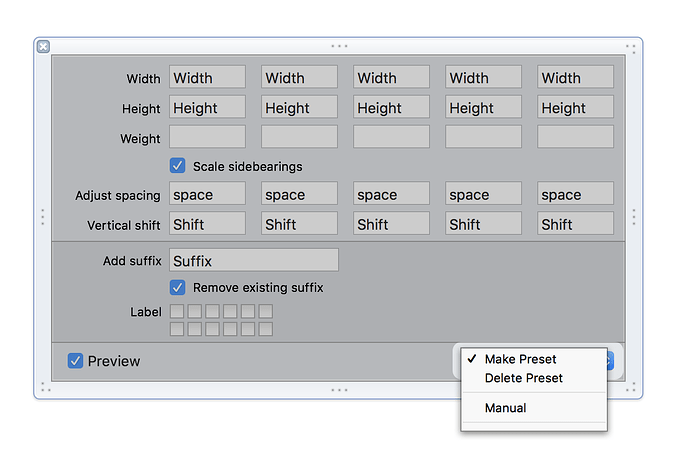 Imagine the menu containing the presets if there are any defined.

I consciously removed it since I found it much more elegant if the glyphs themselves remember how they have been generated (i.e. how they are to be re-generated when updating). Plus, the raw text copy and paste as discussed.

Ben, I assume you are aware that the glyphs store the values within themselves? So, the copy & paste feature is not even that important.

I assume you are talking about the following scenario: You want to add a glyph that is generated in the same way as another derived glyph already in the font. What I suggest is to duplicate that existing derived glyph, correct the name, run the Scaler and voilà – the values will be in the dialogue. You only need to change the “generate from” field, of course.

I use the good old notes too, just in case. hehehehe