Hi,
I have read through the Vertical Metrics tutorial and tried to calculate all the value with the Webfont strategy which is a compromised strategy. Here’s the link to the tutorial I mentioned:
https://www.glyphsapp.com/tutorials/vertical-metrics

The problem is earlier in the tutorial stated that “There is one thing you need to watch out for, though. For whatever reason, the difference between typoAscender and typoDescender should be as large as the font’s UPM (usually 1000)” The UPM of my font is also 1000. But when use the values calculated earlier, 750+235 is 985.

I’m wondering if I should change the typoAscender (and HheadAscender) value to 765 (which is also the setting of the Ascender of the font metrics as well. What would be your recommendations?

Well… the calculation is 750. But if I set it at 750, then the typoAscender + typoDescender would be 985 which is different from the UPM. And the tutorial specifically said that we have to watch out for this value. That’s why I’m not sure what to do.

I just realized I have a little typo in the 2nd line. It assumes you have a value for typoAscender but that is only calculated in step 4. (‘Calculated’ may be the wrong word, they are simply the same in the webfont strategy.) It should read hheaAscender. Maybe that was the source of the miscalculation? So, I assume your winAscent and winDescent values are 900 and 300, here we go:

Thank you so much for the details reply, Mekkablue. When I first calculated, I used the definition of typoAscender under the OS/2. That’s why I used 765. Anyway, now it’s clear that you replaced it with hheaAsender value.

I have another question below:

Regarding the win span, I have read somewhere that it should be 1.2 or 1.25 times UPM.

Can you point me to the source? Who says that and which reason do they give?

These are your winAscent and winDescent values, then. No need to go any higher.

I saw it from https://grahamwideman.wikispaces.com/Font+Vertical+Metrics

Perhaps it just meant as examples, not rule of thumbs?

This is the most relevant topic I could find, so had to revive it.
I’m working on a display font now, and I’ve managed to fit everything (incl accented letters) to 1000 UPM: 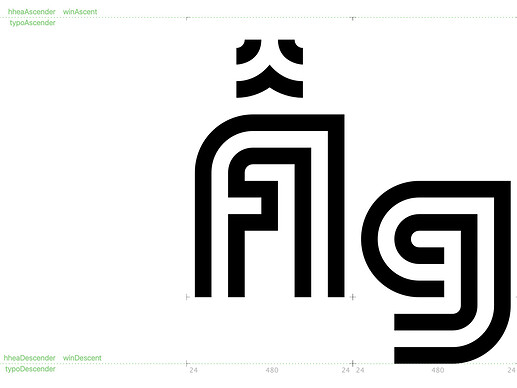 So my question is, do I need to add that extra 20% for Win values in my font here? I don’t think I need to because nothing in my font extends Ascender value, and that little space formed between yMax and Ascender is enough for me to consider it for leading, so I set my LineGap to 0 (zero)

Please let me know if I’m doing something wrong here. Thanks.

There is no reason to keep anything inside the UPM. The limit is the winAscent + winDescent as those are actually limiting the drawing. And because in older versions of Windows and office those values are also used to calculate the line hight, it is advisable to use the same numbers for all metics to have the same line spacing everywhere.

it is advisable to use the same numbers for all metics

But I don’t see much fonts that have the same values for Ascender and WinAscend. WinAscend + WinDescend is almost always 1200 while the Ascender + Descender is 1000.

Will it make more sense, if for this font of mine I set typo line gap to 200 and make WinAscend 1008 and WinDescend 192 ? Which will mean that hheaAscender will be 1008 and hheaDescender will be -192.

I just tested it through MyFonts validator and my original settings passed the test for vertical metrics.

Have you read this: Vertical Metrics | Glyphs

Yes, but it’s just too confusing for me. I guess my initial calculations fit with Microsoft Strategy.
In webfont strategy, when you say to round this value up, do you mean like for example round -192.5 to -193? Or do you mean to round it to -200 altogether?