Ever since switching to G3, shortcuts have been a mess for me. Either:

What am I missing here?

I cannot reproduce. Are the shortcuts colliding with something else? Which exact shortcut are you trying to set for which item?

This is how it looks for me right now: 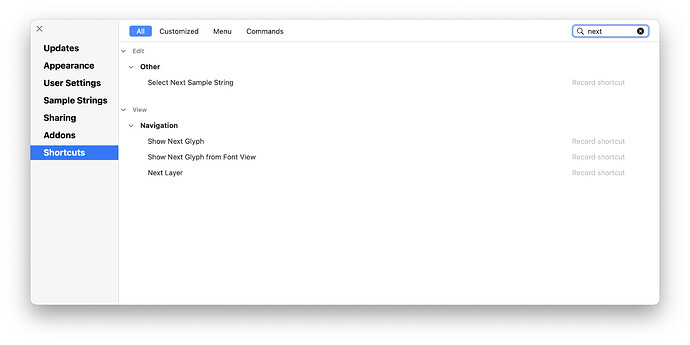 For example do I want to have the RMX Tuner on cmd + opt. + R, overwriting the “Run” shortcut… also never worked consistently

although, I have to say that the next and previous master shortcut I set once, are working still, just not showing

For example do I want to have the RMX Tuner on cmd + opt. + R, overwriting the “Run” shortcut…

Using a shortcut that is already used by another command can be problematic. We’ll look into handling such cases better but in the meantime you can try to set a different shortcut for the other command so that no two commands claim the same shortcut.

It seems that if two menu items have the same shortcut, that item that is more to the left, wins.

Using a shortcut that is already used by another command can be problematic.

Hmmm, that’s news to me. I also tend to overwrite shortcuts I don’t like and have a very particular system how I set things up.

I can see the appeal to have such a menu integrated into the software. But setting shortcuts through the system preferences always did, as supposed to. Seems to be the more reliable system to me

In theory, the app sets the shortcuts the same way as the system preferences. So if you set it in one should make it show up in the other. But there seems to be a permissions problem for some users that prevents the setting from Glyphs to register properly.

I see. Do you see a way to resolve this? I recently set up everything from scratch, on a new computer…

Can you add a shortcut in the Menu group (click the “Menu” in the toolbar of the shortcut settings).
Then run this line in the Macro panel:

Then restart Glyphs and run the command again.
Post the result form both invocations.

I set cmd+y for “show nodes in background”

@GeorgSeifert Is there anything you can learn from that?

noted, that commands I set a shortcut for, disappear form the menu…

Do you have any system helper tools, optimizers, antivirus software, Mag managers or the like installed?

Nope, no such things…