Some Kerning pairs are not kerning in InDesign

I noticed that some of the kerning pairs for the font I’m working on do not work in InDesign on both masters. They do work on Glyphs though.

Please note that I exported my font to the InDesign Font folder, so it shouldn’t be the cache problem. Also, I did save the font in a different name to confirm. And it is still not working.

Any idea how to fix this?

Btw, Mekkablue and George, I just sent the .glyph and .otf files to Glyphs support email.

I just saw it. Will have a look.

In the font file, there is a very high number of kerning pairs, which causes Glyphs to add a high number of subtable breaks. I was able to export it by adding a Use Extension Kerning parameter to File > Font Info > Font > Custom Parameters, and removing the subtable breaks from the features.fea file in the Temp folder and regenerating it by double clicking generateFont.command.

Thanks, Mekkablue. I just add the Use Extension Kerning parameter. But I have no idea on how to complete the rest of the steps. I apologize for the following dumb questions:

I have a look at the file myself. I hope I can optimise the exported feature code.

Script > Open Scripts Folder and you will find the Temp folder next to the Scripts folder. Inside, you should find the temp folders of your exports. Perhaps it makes more sense to downgrade to 983, or to wait for the upcoming cutting edge version.

The cutting edge version from a few minutes ago does not yet fix your problem.

Thanks for the heads up George. Do you by any chance know when you would have the fix? I found the feature.fea file as Mekkablue pointed, but I still have no clue what the subtable breaks are and how to remove them. lol. So I’m counting on your new fix at this point,

I had a look at it. The problem is that you put the slash in the same group than the Delta. That messes up the sorting of the pairs. I added a filter for that. This will be in the next update. But for now, you could remove the kerning groups from the Greek letters - they are not useful anyway as you don’t have the rest of the Greek letters. Maybe you rename them to be math symbols. Or delete them.

Thank you so much for your time, George. I really appreciate it. I’ll work on this today:)

Hi George,
Just removed the kerning groups from the Greek letters. It works!!!. Again, thank you so much, for both you and Mekkablue for looking into this.

The latest cutting edge version should properly export your font.

That’s awesome! Thank you so much.

Hmm… I just “Checked for Updates.” It said I’m already up-to-date with the version 2.4.2 which I installed several days ago. What’s the version number of the latest cutting version you mentioned?

I thought I had fixed this last night. The majority of my kerning pairs work in InDesign, but for some reason o/b kerning pair won’t update in InDesign. 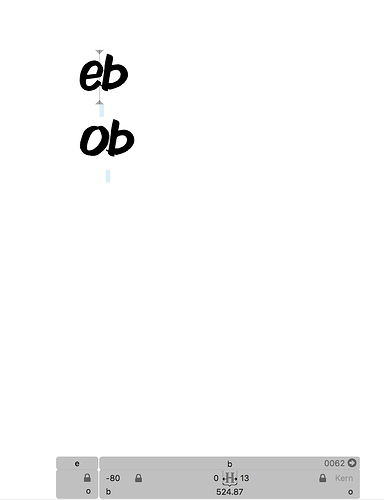 I had deleted all kerning pairs previously and redone them all, but some reason these are not updating.

Can you send me the .glyphs file? To support (at) (this website without www), please. I will have a look.