Some Suggestions for Improvement

I’ve a FontLab Studio user who just started experimenting with the Glyphs demo. While I like many things about the program, there are a few things that I find very problematic that I wanted to point out. I tend to work primarily with pre-existing fonts rather than fonts started from scratch and have noticed that there is a lot of data which doesn’t get imported by Glyphs which really should be.

In particular, the usWeightClass and usWidthClass fields from the OS/2 table seem to be ignored, which should not be the case.

In addition, the program appears to overwrite creation dates with the current date which may not be desirable and tends to recreate the name table rather than preserving existing data (it keeps appending -regular to the postscript name which shouldn’t really be there in a singleton family)

I’d hoped to be able to use glyphs to add names to stylistic sets in a variety of existing fonts (something which FontLab can’t do), but this is proving to be very time consuming since I have to restore a lot of information which I’d wanted to remain the same using DTL OTMaster.

I’m hoping that a future version of this program will do a better job of preserving information when opening fonts and allow the user to decide which information should be changed and which should be preserved.

Glyphs in not primary aimed at that workflow. But I can certainly have a look at it and see if I can improve on it. If you can point out what fields you are interested in, I can try to add support for it. It will always change a few things because the data representation is different…

Thanks for your reply,

One thing I notice is that the usWeightClass and usWidthClass values are being imported – they’re just not being used in a way that makes sense to me. If I open a single existing font, I get this in the Masters tab: 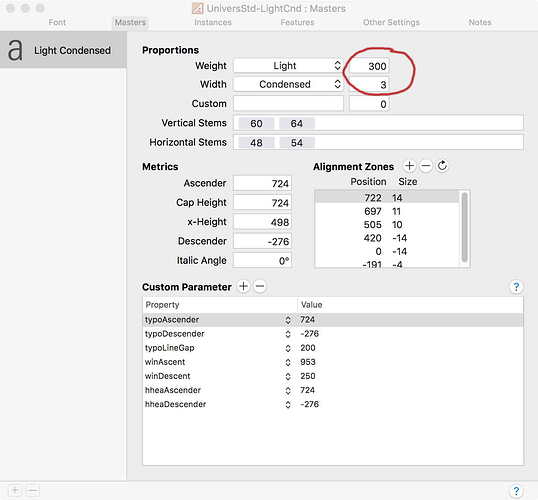 (Sorry, it wouldn’t let me include multiple images)

It would seem to me that the values here should be copied over automatically.

I’ve also noted that when the program reads in entries from the name table it truncates them if a carriage return character is encountered (these won’t be found in font names, obviously, but the copyright field often contains them).

Finally, some fields, such as trademark and notice don’t seem to be imported. It would be nice if any available content from the names table were available.

I appreciate your interest in my feedback,

I fixed the weight/widthClass already. The name table is a bit mir complex, but I’m on it.