The export failure “Something went wrong when Removing Overlap in glyph X” is particularly annoying because it leaves you guessing what exactly was interpolating wrong. I might change the axis value of an instance and all of a sudden a glyph that was fine previously no longer interpolates.

Could you output or highlight any of: The master, the segment, the points near to, or any other helpful info for this error?

Even better would be an advanced version of the “Show Master Compatibility” that will also find such interpolation problems.

And to add one more note:

That is usually not something you can fix, other then sending me that .glyphs files that I can fix the algorithm.

When I remove the overlaps in the glyph it complains about in all masters, there is one master where the overlap is left. Pressing the Transformations > Remove Overlap also fails for this.

Why would this geometric fail to be flattened? 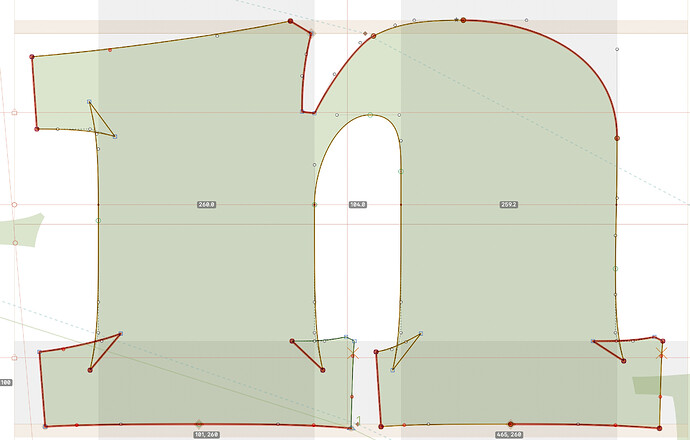 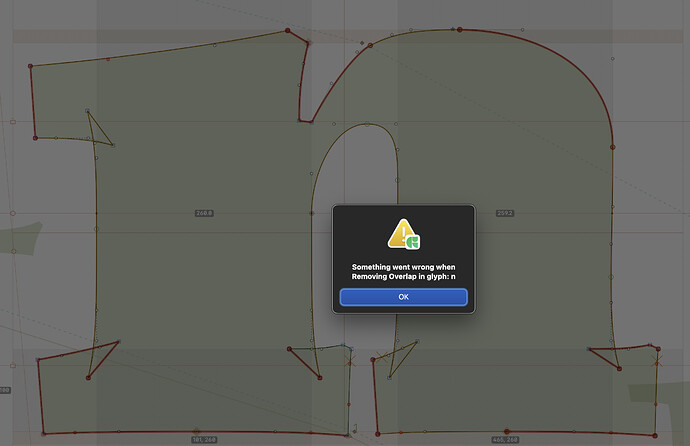 For reference, the flattened lighter master. 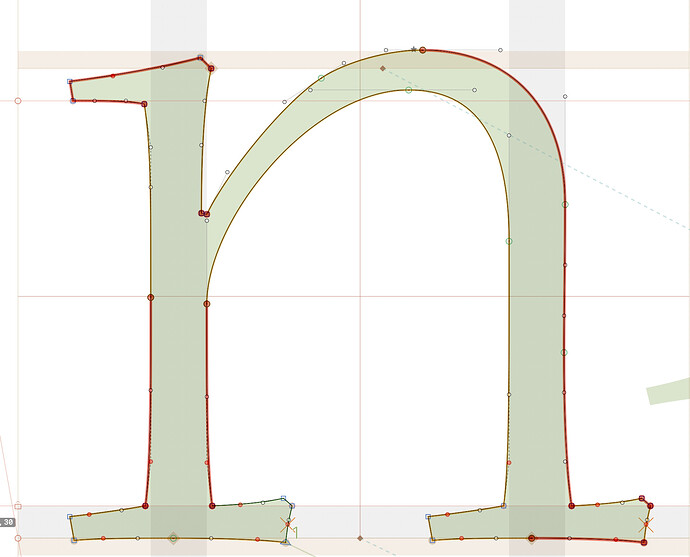 I need the actual file. if you could send it. And always try the latest cutting edge version.

Have emailed you that bold ‘n’ @GeorgSeifert

If it helps your debugging, altering the selected inner overlap in some way make the overlap work 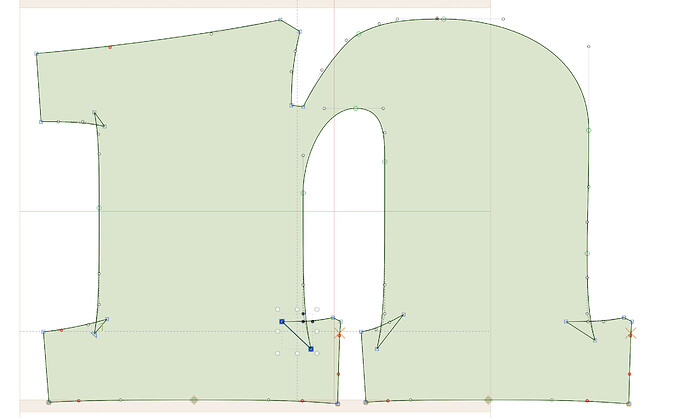 Can the overlap error not at least output which master the problem is in? Maybe even which node causes it to fail? This happens really fairly often and looking at the geometry there isn’t a real conceivable indicator that will make the user understand where the problem lies, other than randomly shifting nodes in all masters.

And even more annoying.

I have a 4 master version of that ‘n’ that when I remove overlaps on all layers the masters are compatible, yet exporting still fails for the “pre-overlap-removed” version, but will export when I manually remove overlaps and then export. I’ll send you another file.

Happens to me all the time. It is possible to fix, but is labor intensive if you have lots of masters and have copied the expanded path to other glyphs.

In my experience, it usually comes down to a single problematic node.
To find out which one, I simply select half the nodes, delete them, and try to remove overlap. If it works, it means the problematic node is one of those. Then repeating the process until I simply delete a single node and it works. Then consider whether it can be deleted or if it can be modified in any way to make a successful removal of overlap.

I have also solved it by doing “Correct Path Direction” or “Tidy up Paths” or a combination of both. As this is quick and easy, that’s what I would recommend to try first.

I just uploaded a new version that improves the remove overlap again.