I’m wondering if there is any way to automatically generate accented letters in SVG (iColor) font? Or they all need to be written by hand one by one?

That is not done automatically. Depending on the setup this might not be possible at all because some setups can only have one image but no components. Can you show what you are trying to do?

It is just the usual handwritten stuff - scanned, removed bg, copied to glyphs. 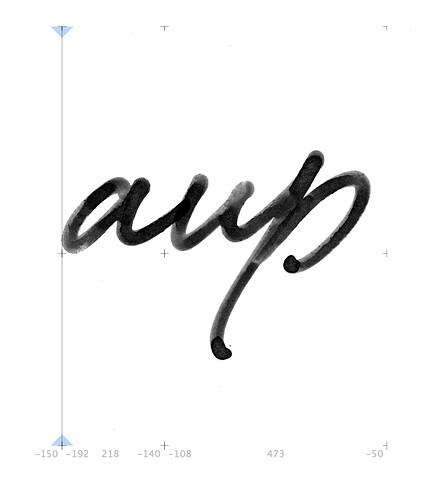 You could decompose the accented letter in the ccmp feature and use make positioning with the combining accents. This works fine in browsers, for Adobe apps you need to activate the World Ready composer to make that work.

Thank you Georg, I’ll try to figure out how it works!

I’m trying to figure out how it works…
A couple of questions:

And this is what I have in ccmp

You don’t need to write the mark code yourself. Just add anchors as described in this tutorial. https://glyphsapp.com/tutorials/mark-attachment

Oh, you mean just set the anchors and have the comb marks with corresponding anchors as well?

But this is what is normally done for any typeface, correct? Just in this case there won’t be accented letters in the font but you’ll be able to construct them manually typing letter+an accent?

The problem it that most texts use precomposed glyphs. So Aacute instead if A + acutecomb. If you don’t like to draw those manually, you need to do sub Aacute by A acutecomb; in ccmp feature.

Thank you, Georg! That’s exactly what I need.

It doesn’t seem to work, Georg.

I have sub aacute by a acutecomb; in ccmp.
All anchors are set in both “a” and “acutecomb”, aacute is an empty glyph. Typing á in both InDesign and Photoshop shows an empty glyph…
What am I doing wrong?

And still, I believe (at least in some cases) InD will always prefer the precomposed diacritic. That seems to be hardcoded.

The World Ready Composer is on in InDesign (still aacute doesn’t show up) and I couldn’t find this option in either Photoshop or Illustrator.
Looks like drawing accented letters or combining base letters with diacritics in photoshop is the only available option for now