I’ve just written a plugin which I find useful, (because I’m awful at type design) but I don’t know if anyone else would. It puts little icons onto your editor view to show you when your glyphs are symmetrical and when they aren’t.

This /I has rotational and reflectional symmetry in X and Y axes: 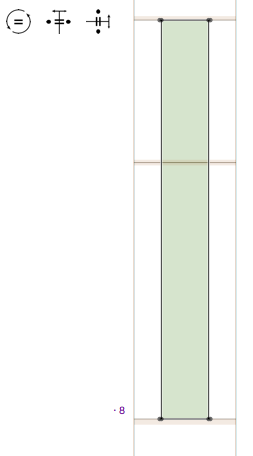 This /H only has horizontal symmetry: 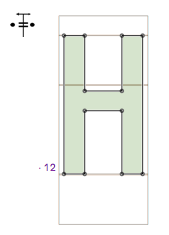 This /O looks like it should be symmetrical, but no icons are showing up. Time to check the points!

This probably has only very limited use, but if it does turn out to be useful to anyone else, I’ll tidy it up and release it. Anyone want it?

This looks very interesting. I would show the icons above the current letter otherwise a preceding letter would cover it. And it might react to selection.

The legs of this K have different angles, but they start at the same point: 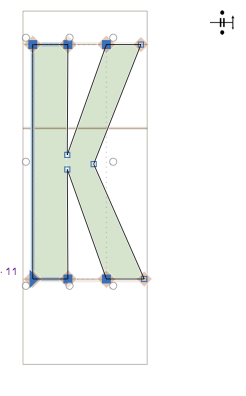 Here is the plugin: https://github.com/simoncozens/GlyphsPlugins/releases/

You are properly aware of Tim Ahren’s Symetrify script? You should team up!

I’m not! Is there a central repository for scripts or for information about scripts? Because there probably should be…

We started something on the Extend page, which we plan to expand in the near future. But it is far from being complete.

We should setup a github wiki or something. I added two pages:

Scripting SDK for Glyphs. Contribute to schriftgestalt/GlyphsSDK development by creating an account on GitHub.

Scripting SDK for Glyphs. Contribute to schriftgestalt/GlyphsSDK development by creating an account on GitHub.

Excellent idea Georg. It would be very helpful if the lists would include the latest revision date.

I used a slightly different approach. Because (1) most (if not all) publicly available scripts are on Github and (2) there’s no overhead to having lots of scripts installed, my Scripts folder is a git repository with no files of its own but with everyone else’s repositories as submodules. This gives me an easy way to update all scripts.

If you clone or download https://github.com/simoncozens/Glyphs-Script-Repository into Library/Application Support/Glyphs/Scripts, then you get everyone’s scripts (that I’ve been able to find so far), and you can upgrade them all with git submodule update.

That is quite smart.
But a list that has some comments and explanations would help, too. But maybe that should be in the same repo.

Sure. And most of the directories have their own README.

Added a few things to the wiki.

Nice, thanks! @GeorgSeifert & @SimonC I updated my GitHub to have a single repository for each plugin now. This matches the structure of everyone else. I’d appreciate if you could update the links in your Wiki. Also There are some new plugins already, and more during the next days. I pm you for the links.

Updated Package Install for Glyphs with your new plugins.