Trouble with script typeface when exporting Pdf from InDesign

I am working on a script typeface (so my letters are connected). When I’m looking at a pdf with my font exported, my metrics are a moving slightly. On Glyphs, It’s ok, on InDesign, it’s ok too, but when I export as a pdf from InDesign, some random letters pairs change their metrics. I’ve checked everything and there are no bugs or problem with my metrics, they are all supposed to work well.

On the screenshots, you can see that on Glyphs letters ‘w’ and ‘i’ are smoothly connecting, the same is true for InDesign too, but when it’s exported as a pdf, it does not connect nicely (actually I can join only one screenshot, so I’ve uploaded the one with the bug).

What I noticed too is that letter pairs are having the same bug randomly. It can be pretty much any letter pairs. Also, there are no kerning pairs in my font, in case that would have been a problem.

I really hope someone can help me out on that because I’ve been struggling so bad trying to find a solution. Thank you so much for taking the time for me. 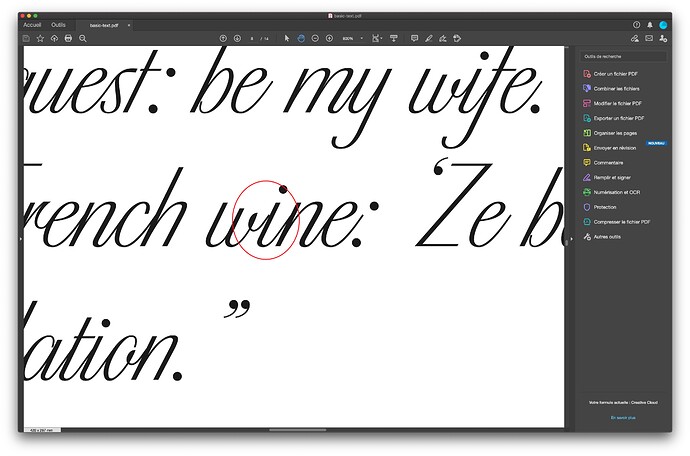 Are the glyphs hinted? If yes, don’t hint this kind of font.

It might also just be a rendering artefact, or due to InDesign adapting the tracking to make the text fit in the text box. Make sure you set flush-left, and experiment with the width of the text box.

Thank you so much for your answer! So it’s not been hinted, at least, I did not do anything in order to. I’m going to check the width of the text box, that might fix it. And it was flush-left already, so it might be the text box width!