I’m not sure whether this is a bug, or (probably more likely) if I’m doing something unintentionally, but…

Glyphs keeps changing the widths of many of my glyphs, and it’s unclear why. Of course, my first thought is that this could be related to auto-alignment, but in most cases, these changes occur when I haven’t edited any of the base glyphs of composed glyphs, or the glyphs that are used as metrics keys for spacing.

As a specific example, here is a screenshot of a Git diff for modified files, viewed in VS Code: 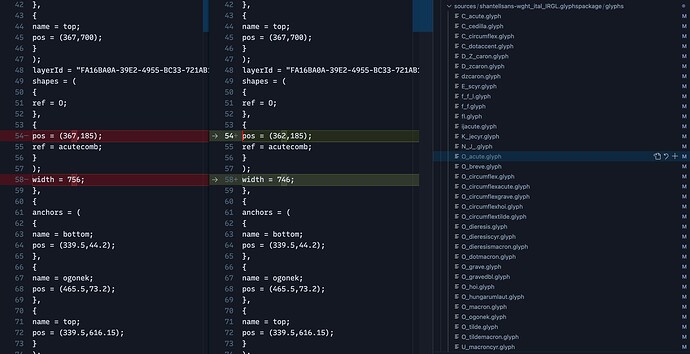 It shows that the Oacute (and quite a few other glyphs) have changes (all of which are little things to do with position and width of components). It also shows that there is no change in either the O or the acutecomb bases.

(Below is an image showing that the O doesn’t have sidebearings set with metrics keys.) 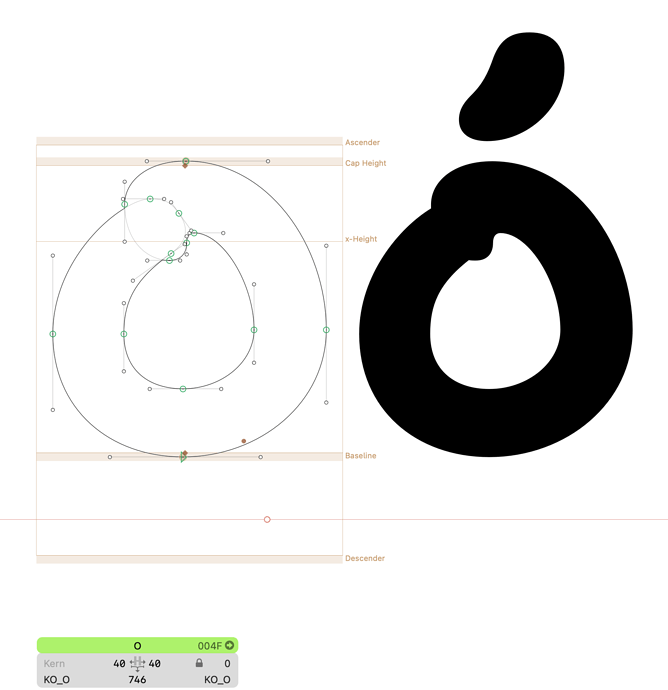 This seems to happen basically every time I make any edits in Glyphs. In the above example, I had slightly edited the contours of the u, and fixed the start point of some layers of arrowright.

I alternate between just committing the changes and resetting them, because they always seem to be within 10 units or so, and I figure they are proooobably(?) happening for a good reason. Of course, I am both nervous to accidentally reset changes I did intend, and nervous to commit changes that subtly mess up spacing that has been carefully designed.

Thanks for any insights!

In this case the update was justified because the Oacute apparently still had an outdated width stored. I assume the composite is autoaligned? I believe the auto-aligned width did not always get written (because it was aligned anyway), unless you somehow touched the glyph, like had it open briefly or passed it when stepping through glyphs.

In this case the update was justified because the Oacute apparently still had an outdated width stored.

Oh, haha, I hadn’t quite noticed that the O had the new 746 width! Sure enough; thank you for helping me see that.

I assume the composite is autoaligned?

Yes, these components are auto-aligned.

I believe the auto-aligned width did not always get written (because it was aligned anyway), unless you somehow touched the glyph, like had it open briefly or passed it when stepping through glyphs.

Ahh, perhaps the process of conversion from .glyphspackage to .glyphs is passing over the glyphs and updating width values, or maybe I somehow touched these glyphs while working on others.

This seems good to me, now. Thanks!

On some point Glyphs would run the auto alignment on saving the file to avoid this dialog. But often that was taking too long. I’ll need to check if I can reenable it on some point.