Uppercase to lowercase in Glyphs Mini

I have done all uppercase glyphs, multiple languages support, ligatures and fine tuned kerning (used groups and also individual kerning for some glyphs). Now I would like to make lowercase glyphs that are basicaly uppercase duplicates. The font will be “uppercase only”.

I simply would like to keep lowercase and uppercase glyphs synced for future updates (when I change kerning for AB, it will apply for ab as well).

I have found some related topics here, but I am not pretty sure about this.

Cau you give me an advice for the best solution to do this properly?

I would first set the kerning groups for each glyph i.e. A on both sides for the capital A. You can then copy and paste the uppercase glyphs and change the resulting name (A.001, B.001) to lowercase.

I don’t know if glyphs mini has a compress version but if so you should be able to then find it in window>Kerning I believe. Select all with cmd-a and hit the compress button at the bottom (I somehow sometimes need to run it twice maybe for both sides?). Now all kerning groups should technically be working.

I’m not on glyphs mini but I do believe some forum posts discuss the same for mini like this one Kerning Groups?

I have already set kerning (both groups and exceptions) for each glyph. The main goal here is to know the best solution to duplicate glyphs from uppercase to lowercase.

I have discovered few options, actually thinking about this one:

I am not sure if this is recommended approach and those duplicated glyphs will be all in sync for future updates. Since I can’t do any scripting in Mini, I would like to avoid manual editing for separate lowercase and uppercase glyphs if possible.

It is actually not a good idea to copy the glyphs just like this. You should add components to the lower case that point to the uppercase. That way all changed to the uppercase are synced. And alle kerning groups should mach. Only the kerning that between individual glyphs can’t be synced easily.

I thought it’s good idea to ask before doing it. Thanks for explaining.

I have lots of kerning pairs, but very few individual, so this will work in my case.

I am new to Glyphs app and I am still in learning process. Going to swith to full version later, but can you tell the difference in approach to achieve the same in full version?

And thank you for your Handbook. It’s very helpful indeed and your app very intuitive. Pleasure to work with it!

This works the same in the full version.

Great. I see in full version that I can do a lot with scripting that saves time rather doing it manually.

Also, look at the various tutorials on the Glyphs website. One that would fit for what you’re trying to do is Recipes; look at the section titled Single component recipes.

This one worked perfect for me!!!

only kerning groups left to fill out then

I have also noticed that kerning groups left blank and need to be inserted separetely for each glyph.

In Mini version there is no Glyph > Add Glyphs… (Cmd-Shift-G) command. I can only add a single glyph at once. Unfortunately, Recipes is not an option for me. 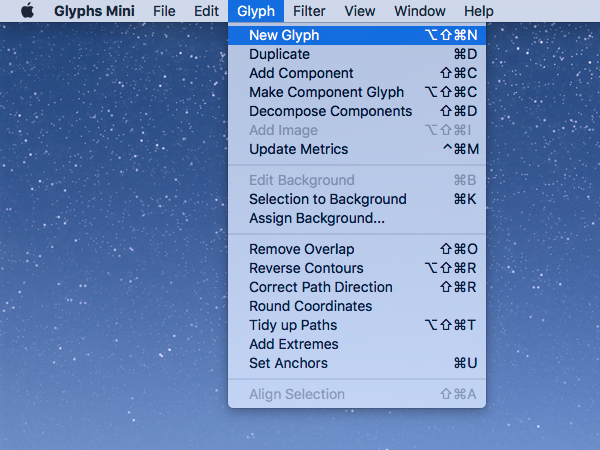 yeah that’s why I prefer the copy pasting because it keeps the groups. But that might not be the best option if you expect more editing. (which maybe you should always anticipate).

But it still needs the manual kerning groups.

note: I think I may have left out a germandbls or something, but this should cover the basic, western and central European languages and diacritics besides that.

I did it like Georg suggested and it worked as I expected, apart from kerning groups (maybe there is a reason for that). It was a bit time consuming, but full version with recipes is something worth upgrading.