I had hinted main(first) master of multiple masters font.
When I generated instances, hinting transferred to another masters - OK.
Then I exported it to variable font and found that variation axis had stopped working.
If I delete all hints from glyphs, then variation starts working again.

What am I doing wrong?
I have also tried just to set 1 anchor in 1 glyph, but it breaks variation too.

I just tried with the latest cutting edge version and the hinted plus variation do work fine. Could you send me your file?

It works fine for me after a small adjustment. The masters need to be ‘in order’. So it need to be Light > Regular > Bold. Then add the Get Hints From Master and Variable Font Origin custom parameter.

It works fine for me after a small adjustment. The masters need to be ‘in order’. So it need to be Light > Regular > Bold. Then add the Get Hints From Master and Variable Font Origin custom parameter.

Set options as you said, but it didn’t work for me.
It works on Mac, but doesn’t on Windows, so the problem arises because of hinting, I think. 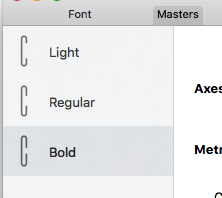 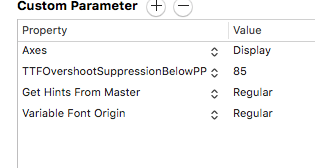 What version of Glyphs do you have? It works for me.

Can you see if that font works for you:

Your file doesn’t work at all either on a Win or on a Mac.
How it looks like on Axis-Praxis:

How it must be with regular weight:

Just tried and the file from above works as expected in Axis Praxis:

UPD:
It works in Safari, but doesn’t in Chrome(newest version)

UPD2:
I’ve generated font without hints then hinted it in VTT, and everything is working. So the problem is with Glyphs hints.

Have you tried the latest cutting edge version?

No, try the latest Glyphs beta please. Go to Glyphs > Preferences > Updates, activate both checkboxes and press the Update button.

We are investigating in the meantime.

I have installed 2.6.2 (1245):
Without hints - the variation works.
With hinting - the font stops working at all in Chrome

Sorry, I was busy.
I have installed 1246 and it seems to be working fine now.
Thanks!

Hey Georg,
This is true,
‘…zones are there to unify feature between different glyphs.’

And it’s so that there is one set of glyph hints for all the design space.

But also in vars I assume zones are also there to unify the hints on alignments across styles of the design space.
I am wonder, thus, as we are making fonts with variable x-hts, ascenders and other alignments, how is Glyphs getting from the default cvt to the cvar, which records the changes to alignments and other control values over the design space?
Thanks.

You define the zones and stems in each master and they get variation just the same as the outlines.