What caused this “mark" after reinstalling a font

I used to report a problem with naming here,

Naming is really so difficult?

I want to name a Chinese font. but, it’s not shown. I add localizedfamilyname, ROS set to Adobe-GB1-5. no work. Anything else to do? Glyphs is really a great software, but compared to fontforge, naming in Glyphs is a nightmare I’m sorry to say so, but I want to laugh out loud after so many tests and long time (driving me mad). By the way, after installation, it can be used in photoshop, but, in Word or WPS ,it’s not working . Font created on Mac, installed on Win7. I used to make same font…

and apprantly some changes have been made.
After reinstalling a font newly exported, i found the “mark” in ps. I didn’t change the export name, but it’s not recognized in PS, leaving a mark there, regarding it as no-existing font.
Of course, if i click on it, it will be recognized, and the mark will be gone
For lower version of Glyphs, there is no such problem. 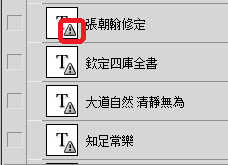 I think this icon means that Photoshop can’t find the font that was used to render the layer. It might be a slight change in the name table. It should only appear once with the new font. Can you compare the name table of the original and the new font?

I compared the name table. They are exactly the same. Wired.

Maybe photoshop just realized that the font was updated.