It seems I cannot add WWS Family and Style names for a Variable Font export setting.

I have a font that consists of 8 weights with 10 non-WWS variations, so I have called my static exports Font-1 Light, Font-1 Regular, Font-2 Light, etc. For the static exports I have set up WWS names so the family becomes 10 families “Font 1” to “Font 10” with 8 weights each.

But I can’t enter a WWS name for the variable font. Instead, Glyphs uses the name of the last defined instance, which is then ID 21: “Font 10”, ID 22: “Black”, and doesn’t match the other names in the screenshot at all. 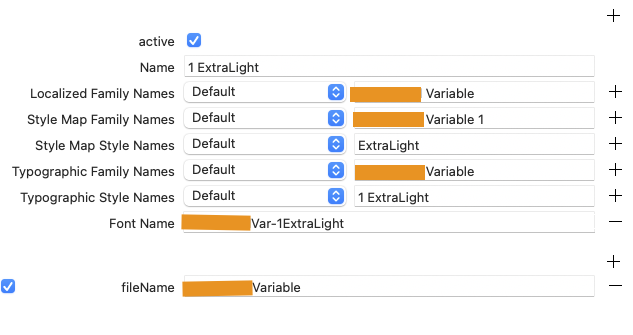 Is there a better way to set this up?

How would they be useful? Just putting one set of them in the name table is not that useful. Can you send me a .glyphs file and a .ttf that is setup like you expect it?