Working on my first effort in Glyphs, a set of DingBats.

I’m starting with drawing my shapes in Illustrator. I have found that setting the grid spacing to zero helps maintain the integrity of the original Illustrator shapes. Would this be considered best practice?

Also, when I resize elements very small some nodes turn red. Is this a warning indicator? I uploaded an example jpeg. 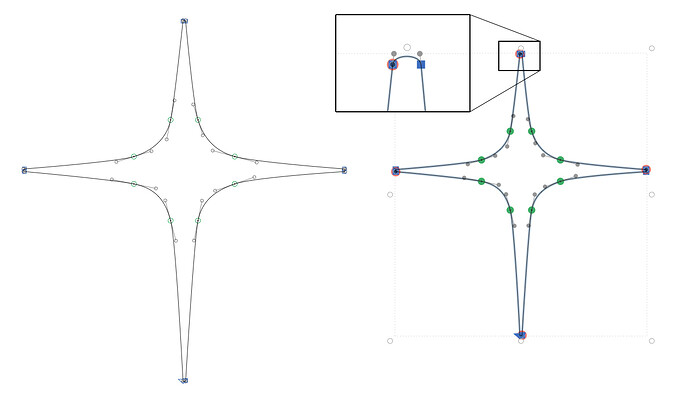 Red dots means that there is more than one node in the same location, they are overlapping.

Thanks for the reply.

The red dot means that two nodes are very close together. Normally that would mean they are on top of each other, but not here. it is just a warning.

One thing you need to consider: Fractional coordinates increase the file size and there are still some apps and printers that can’t handle them.

If you draw tiny curves like this, the glyphs has to be rendered quite big until you even see it. So as long as you intend the font to be use on screen, nobody will ever see it. That means you could just as well remove it. The same is true for the shapes. I would round the coordinates from Illustrator and move them around a bit until it looks good again. Again, moving a node a few units will not be visible in normal rendering sizes.

Thanks for the guidance.