Could the “add extremes” work only on a selection? It currently works on the whole character, which means if I want to add extremes just to a part (say a bowl, not a stem) I need to then remove them where they’re not required. Thanks.

Pick your Draw tool (shortcut P) and Shift-click on the curve segment you want to add an extremum (or inflection point) on.

Thanks, Rainer - hope you’re well. I’m afraid it doesn’t work for me - with the pen tool selected, it still adds extrema in places other than the selected element (here, the bowl is selected, unneeded extrema circled) 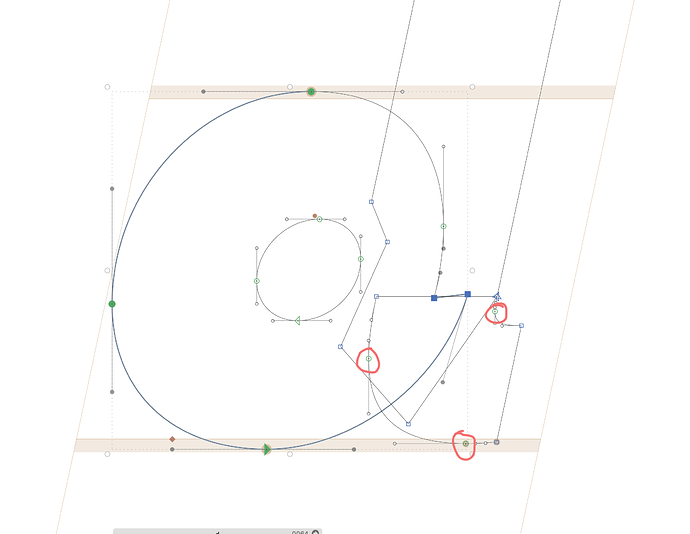 The filter, that is, not adding the point manually with the pen tool (which is not too accurate).

The tool ignores the selection. Just click where you want your extremes.

Ah, you mean don’t use the filter at all and do it manually point by point, using the shift-click to constrain it? I see - but would it also be possible to do it the way I suggest, using the filter on the selected element? That way you can add multiple extrema at once, which is faster.

Is it faster? You save the time you’d spend on selecting.

In some cases, yes. Selecting isn’t too hard

I agree with Rainer, it’s faster to Shift+click roughly where I want (you’ll notice that the detection is quite forgiving) than carefully selecting lots of nodes. When you’re selecting segments, you’re essentially doing the same stuff spending more clicks and attention. Having said that, it is sometimes faster to select all and deselect the places where I don’t want extremes. Form that perspective, I would see it helpful and don’t see why it cannot be done.

Check Italic Extremes on the plugin manager, you can add extremes on selection if that’s what you want

A good hack to achieve this is to reverse select everything, command+x cut them, add extreme, and paste them back! I use this all the time

Sometimes I feel Glyphs’ Add Extremes does not work as effectively as FL’s same fuction. I rotate characters some degrees when making italics and quite frequently I need to copy paste and run Add Extremes in FL and bring the contours back to Glyphs because it failed to add extremes in some relevant parts.

Can you show an example of a relevant part that failed?

Would Force Extremes (hold down Opt key) or Shift-clicking not add those extreme points either? The algorithm tries to avoid very shallow and short segments, which would change the shape too much. Perhaps that may be the reason, but usually, forcing extremes as described works in those cases.

Thanks for the advice. I’m gonna try them.