Hello everyone, I would like to ask you an advise for solve a problem I’m having with dlig.
I would like to have a Discretionary ligature of three glyphs (e, slash, o,), which only appears if there is a space after these glyphs (so if they are at the ending of a word). How can I do it??

It’s working a little bit but it create some problem (mainly on the web, where is not working at all. On adobe softwares the ligature appears but with some bug).
I know that it’s not the best to include the space in ligatures, since it’s often handled independently of the font.

Does anyone have any suggestions?

You can use the following rule:

Here, no space glyph is needed (which – as you said – can be problematic). Instead, the substitution rule is preceded by an ignore rule. The ignore rule says that the pattern e' slash' o' should not be matched if followed by a letter (@AllLetters).

Glyphs can generate the @AllLetters class automatically for you. Click the plus + button next to the Classes heading in the Features tab and select AllLetters from the menu: 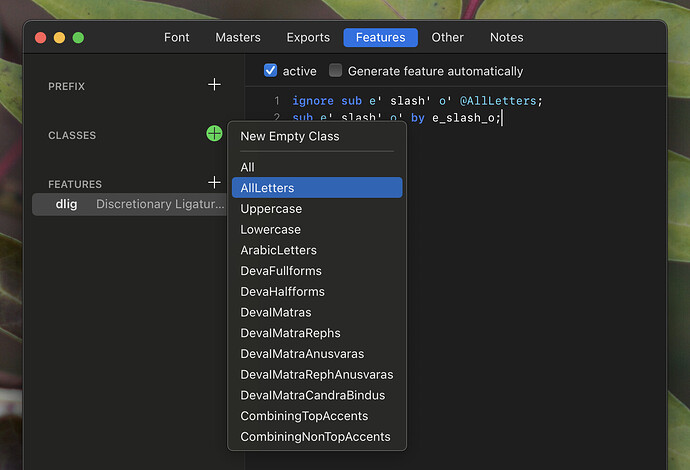 Great, thank you! it works really good!
Thanks a lot