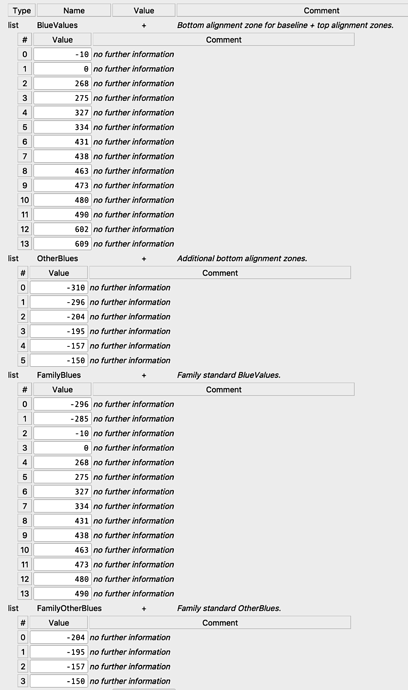 How does Glyphs (2 and 3) differentiate between BlueValues and OtherBlues?
If I have a Bottom Zone (OtherBlue) that is above the Baseline (such as bottom alignment zone of superiors) – how is this specified so Glyphs knows it is a bottom zone? Is it dependent on specifiying the top or bottom of the zone and a pos or neg range?

In the Glyphs Manual you state that only 5 top zones and 6 bottom zones can be specified. Whereas the spec says up to 7 top pairs and up to 5 bottom pairs.

I guess I could just ignore Glyphs and edit in OTMA but this seems a bit painful (perhaps).

same font exported from FontLab 7 - and its results in OTMA 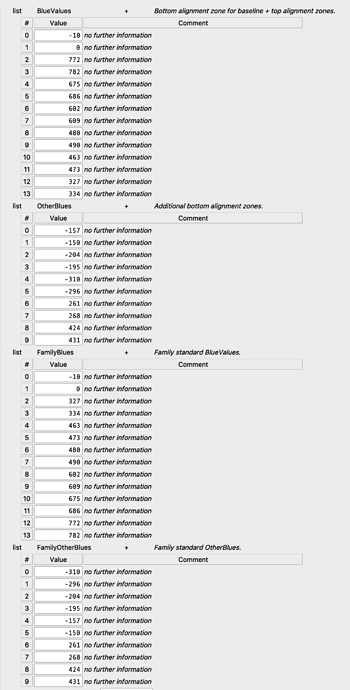 In the Glyphs Manual you state that only 5 top zones and 6 bottom zones can be specified. Whereas the spec says up to 7 top pairs and up to 5 bottom pairs.

Thank you for the nudge. I had another look at the spec. I refer to ‘Type1 Font Format’ published by Adobe. Chapter 5.3 BlueValues, page 36 and 37, my emphasis:

The value associated with BlueValues is an array containing an even number of integers taken in pairs, and which follow a small number of rules:

And then there is chapter 5.4 OtherBlues, page 38, again my emphasis:

The optional OtherBlues entry in the Private dictionary is associated with an array of pairs of integers similar to the BlueValues array. However, the OtherBlues array describes bottom-zones only. For example, these may include: descender-depth overshoot position and descender-depth, superior baseline overshoot position and superior baseline, and ordinal baseline overshoot position and ordinal baseline. Up to five pairs (10 integers) may be specified in the OtherBlues array. Numbers in a pair must be in ascending order, with the same restriction on the maximum difference in a pair. Pairs must be at least 3 units apart from all other pairs, including those in the BlueValues array. (This minimum distance can be modified by the optional BlueFuzz entry in the Private dictionary.)

So, in the wording of the spec, it is one ‘baseline overshoot’, six ‘top-zones’ and five bottom-zones. So, if you count the baseline overshoot as a bottom zone (which is how it is treated in the Glyphs UI), it is six and six. This is how I described it in the tutorial:

The new PDF manual is in the works, but will still take a while. Tutorials currently take precedence. I hope to find more time in the Xmas holidays.

Thanks!
and for the link – I couldn’t find that as I was searching for ‘Alignment Zones’

I was beginning to guess that Baseline was treated as a Bottom Zone . . .
All sorted now