I do not know the fool who told you that allah-ar composite is mandatory!
Arabic fonts has a special form to allah-ar. Therefore: been included in a unicode map as aesthetic form.

This explanation of the word Allah

I do not know the fool who told you

Please be polite. Otherwise we can’t answer you.

Please be polite. Otherwise we can’t answer you.

I do not know the Genius who told you that allah-ar composite is mandatory!

Is there another problem so I do not find an answer?

As we are not native arabic we appreciate every explanation on how the script is used. But form your post it is difficult to understate that your trying to say (that might be a language problem). Do you mean that we shouldn’t add the allah-ar ligature to the default set? Or use the llah-ar? The allah-ar has a unicode that makes it difficult to omit it.
Or do you have a question on how to handle mark positioning in the ligature glyphs?

Composite characters in arabic fonts is divided into two sections:

“This is a written addendum” means the Prophet Muhammad and not a rule, to be added to this list .discretionary ligatures
The second point if you add allah-ar you must add llah-ar too, but when the last addition, it appears in the list of other, and the problem here anchor will not work .

Please be patient. We have a lot more things to do.

There is a big difference between allah-ar and llah-ar. The former has a unicode and is handled a bit differently. Normally ligatures are named with the names of the components connected with underscores. So normally the allah-ar glyph should be called alef_lam_lam_heh-ar. So if you like to have a ligature without the preceding alef, you need to name the glyphs lam_lam_heh-ar. That will generate the correct feature code.

And the mohammed-ar is called mohammad-ar following the unicode name.

All the ligatures we are speaking about here will go to the dlig feature. That means they are not on by default.

Thank you for the clarification, but allah-ar Are generated directly in: dlig and: rlig!

Are these fonts designed by an Arab person?
See this example until things are clear to you: 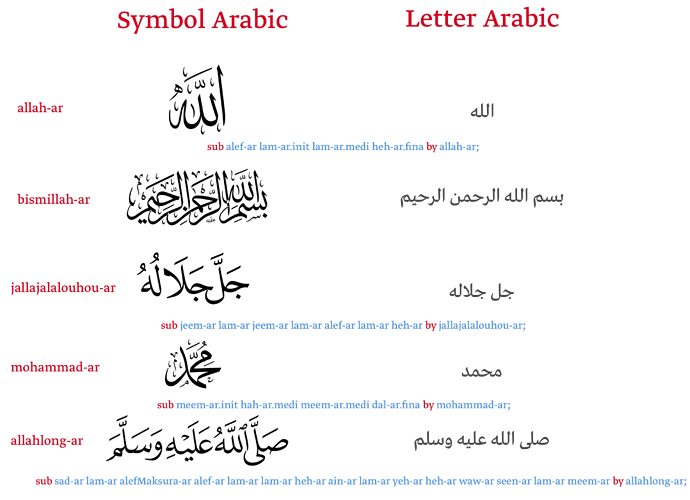 These characters are classified as symbols, not letters