I have a problem in the Marks ، When I use the Anchor for (points) and (Dot-less),Marks shortened the process for hundreds of the Glyphs…But when you use the property with Marks Discretionary: The Marks depends on the private Anchor: (main Glyph) is not the Anchor of the point.

Is there a solution to this problem?

Feel free to send the font to support at this domain. 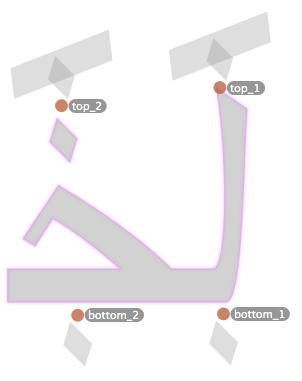 Mr. mekka blue: Can not solve this problem in the glyphs?
Put the “Anchor” above all the points in the “composite glyphs” is very tired and fatigued

If you hit cmd+U, it should add the anchors and you only need to put them in the right place.

Normally, the anchors are copied form the base glyphs but this don’t seem to work for ligatures. I will have a look at it.

Getting the anchors is not difficult: Cmd-U. You can even do that for all letters and ligatures at once.

For manipulating anchors in many glyphs at once, you can try:

Georg Seifert
Yes, this is what we need: Take a look

Arabic Glyphs are similar form but not similar in points.
It’s not about how to insert or copy and paste the anchor.
And rather stirring up the points and take the process of developing the marks of Arabic fonts long hours.

But I’ve formation of all typefaces in as little as five minutes by placing anchor points above and dotless but happiness does not last long, this method does not work with composite characters!

As i said the process will work for ligature components, too. I have to fix a few things and release it with a update, soon.