Is there any technical difference between “threedotsupabove-ar” and “threedotsabove-ar”, both used?, any one preferred over the other?

The formation of three dots is important, and is not a stylistic choice. Have a look at Persian and Urdu sets of Arabic, where you can find letters with three dots facing down.

Thanks, but as I noticed both of the marks mentioned are stacked “facing up” that’s why I’m wondering what’s the difference.

I see, I actually didn’t know there are three different ones. Given its younger number of threedotsabove-ar compared to up and down counterparts, I think it was supposed to be generic and multi-purpose, and made much earlier.

Should I? Glyphs uses up above almost exclusively and I’ve never used above once in my Arabic.

Thanks man, that was clear and super useful, Dankeschön

Right. From Unicode categories one should use threedotsabove-ar but because the other is more descriptive, it is maybe better to the ‘wrong’ glyph as a base for you components

instead we could have only two

And that will suffice for “Arabic - Urdu - Persian”

Thanks for the info. I’ll have a look and see if I can simplify this.

06DB threedotsabove-ar is a combining mark that was added to Unicode to represent the small high three dots (hence the name ARABIC SMALL HIGH THREE DOTS), which is distinctly smaller than the three dots above seen in letters with three dots like 0634 sheen-ar, etc.

Designing or using 06DB threedotsabove-ar to compose the letters with three dots like 0634 sheen-ar, etc. is wrong.

@GeorgSeifert 08A7 meemThreedotsabove-ar should not decompose to “meem-ar, threedotsabove-ar”, none of the three dots letters should use 06DB. It would be better if 06DB had “small” in its name.

Thanks, it’s not about what I want, can you please send visual references on how [ FBB7, FBB8, FBB6, FBB9] can be useful, and how others may use them? the 068F and 0764 look really wired (I don’t think they are being ever used)?

The small three dots are used in Koranic texts (it is in the “Koranic annotation signs” group in the Arabic block in Unicode).
It is also used in West African languages, for example : http://www.afrikanistik-aegyptologie-online.de/archiv/2010/2957 shows a sample in Wolof using small three dots on some letters as well as the “normal” three dots on sheen. 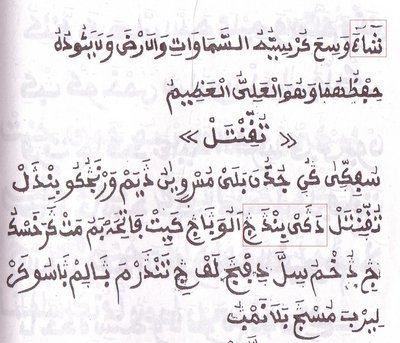 068F ڏ is used in Sindhi, so for example see https://sd.wikipedia.org.
The others were proposed as letters by Isesco (Islamic Educational, Scientific and Cultural Organization) as an attempt to standardize African languages written in the Arabic script. See https://www.isesco.org.ma/standardized-quranic-script/. It’s not clear how much they are used.

BTW, in some styles, it’s acceptable to have the dots pointing in any direction for the “normal” three dots letters, for example having the three dots pointing down, left, right or up wouldn’t change the meaning of the letter. Of course this only applies to cases where no letter uses the opposite direction, so it may not work in Sindhi.

Well, I don’t have issue with the small three dots, apparently these three dots are used as “accents” in very rare cases (I’m not sure if they do exist in unicode, I can’t find them in Glyphsapp), also when you talk about Quranic script then this is a very special case.

It is interesting to know these forms of letters, so thanks for these, but non of this is practically needed for (Arabic, Persian, Urdu) maybe (African or Sindhi) this was my first comment. Thanks again man!

‘threedotsupbelow-ar’ and ‘threedotsdownabove-ar’ are important for many languages and are not just a stylistic choice. Sindhi, Pashtu, Shahmukhi are to name some of them.

However, Arabic, Persian and Urdu don’t need them, if that’s your primary goal.