Arabic or Persian "half space" for editing kerning and metrics

I was wondering to know how to edit kerning and metrics glyphs in glyphsapp…
in Arabic or Persian keyboard languages such these letters and words:

It does not work! How or with which features can I enable to edit kerning these words and letters.

You want to know how to do kerning and spacing? There are tutorials for both topics. In Arabic, just don’t forget to switch to RTL before you kern.

Hi @mekkablue, How are you…

and I edited these shapes already!
If you copy them to glyphs app you can find out what I am saying exactly!

Is there any way to edit kerning with half space between these letters?
I did not find any tutorials.

What is a half space?

Not on my Mac now, will try copying the text later.

update: i think you are missing the glyph for the character in the font, that is why it doesn’t show it and the letters before and after are connected.

Best way to find out which character is missing a corresponding glyph in your font is to use UnicodeChecker’s Utilities window (Cmd-2) in Split-up mode: 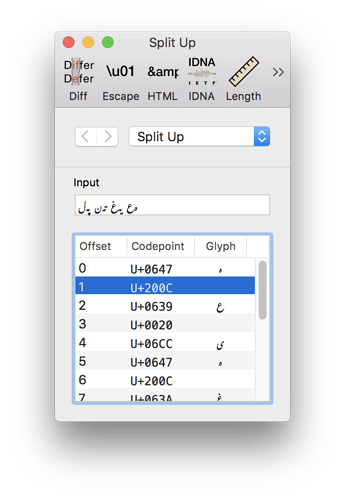 But How/Where can I find UnicodeChecker’s Utilities window
where can I get this plugin!

I think what you mean by “half space” is a “Zero width none joiner”.

I never heard that it is used in this place. Why do you need it?

I tried to add kerning between heh-ar.fina, zerowidthnonjoiner and reh-ar but that didn’t work. It turned out that the zerowidthnonjoiner is ignored for the kerning. So you just need to add kerning between heh-ar.fina and reh-ar. That is a bit tricky as Glyphs will always connect the two. So the fasted solution is to add this to add a kern feature like is:

This will not show inside Glyphs but if you use TextPreview or Indesign you will see the effect.

Hi @GeorgSeifert
How are you.

Thanks for responding, I just working on “Zero width none joiner” to get results, But I do not know where can I get UnicodeChecker’s Utilities window (Cmd-2) in Split-up mode as @mekkablue mentioned above. could you please give me some info. 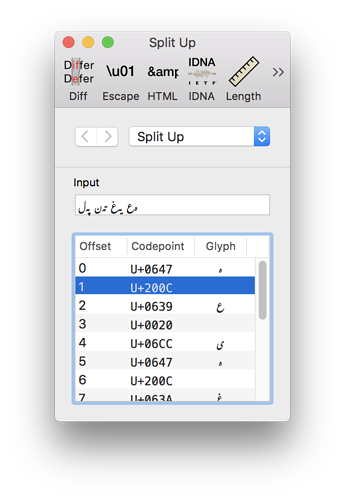 Mekablu is right. The lack of ZWNJ in the font is the most probable cause. ZWNJ is on Persian keyboard and some other languages (Kurdish also I think) and very heavily used. For ‘half space’ we could use a more suitable code but we are facing a de-facto situation. If this code (U+200C) doesn’t have a glyph in the font no kerning can be applied to it.
In a real editor ZWNJ will be taken from a system font. So the letters on its sides won’t connect. In Glyphs editor I guess since it is not in the font it is simply ignored and the letters connect. But either way, as long as there is no glyph for ZWNJ in the font, kerning cannot be applied. You have to add a glyph to the font named uni200C and put its width to zero.

Yes your right, I am working on this common issue to get best result.