On my oslash (ø) glyph, I am currently using brace layers. I want to switch to an alternate glyph (where ø loses the center part of the slash) starting at the bold weight. Because I use these brace layers, and I don’t think it’s possible to have both braces and brackets, I was thinking to use the Rename Glyphs parameter. This would work well on my instances, however, I am curious if this would work on a GX variable font?

No, it doesn’t because you need a point in the design space beyond which it is supposed to kick in. An instance attribute does not suffice in this case because it leaves open the question: where does it start, where does it end?

The current implementation allows for either Bracket or Brace layers, but not both in the same glyph. You could do a couple of Bracket layers that retract the slash quickly between two coordinates in the design space.

It is a multi-axis font so a bracket layer alone isn’t possible. I guess I can try doing something similar with a brace layer – two slashes that shrink between say {700,400} and {701,400} for example…

Yeah, three brace layers did the trick (one for each width in the design space, each of those that looks like one stoke is just two overlapping). Still have a lot of work to do on the design itself but this looks like it it’s functioning correctly, thanks @mekkablue! 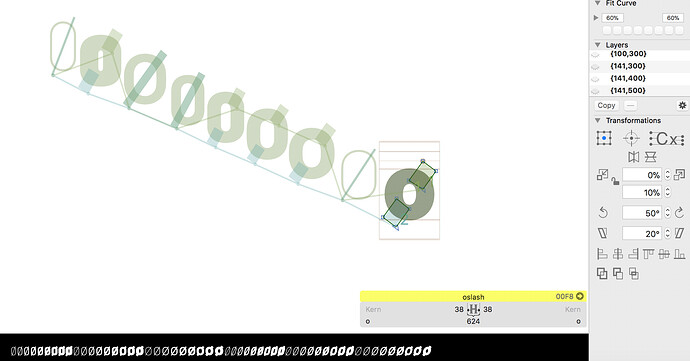 What you need the brace layers for? Just just bracket layers.

I think he means to make more adjustments than just the gap.

@mekkablue is correct. But I couldn’t use bracket layers even if I wanted to because my font has two axes, weight and width - I thought bracket layers only work if you have one axis?

They should also work with more axes now, but it gets pretty complicated occasionally.

Hi! I’m trying to generate a variable font with two master and one axis but if use a bracket layer I get this message when exporting.

You need two bracket layers. Or you need to explain the setup in more detail. Could you send the file?

I am having an issue exporting bracket layers to a variable font in Glyphs 2.5.1 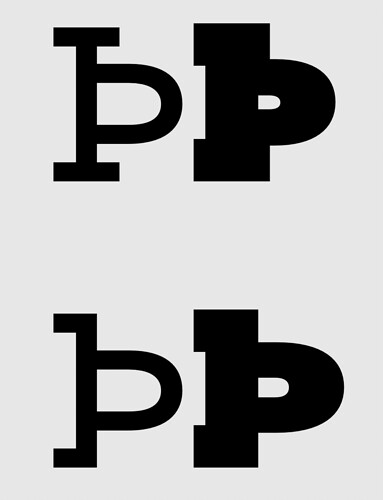 My setup was to have the top two on their respective master layers and the bottom two on bracket layers at [130]. While this does in fact export the design successfully, it is not switching out when tested in FontView and on the web.

I got it to work as expected by including compatible bracket layers on all others master, but I am not sure why this is necessary.

You need compatible bracket layers in all masters because under the hood, Glyphs creates a whole new glyph that needs to have all masters. And then the glyphs are switched.

That makes sense, thanks!

I am working on a variable font (vf) that uses bracket layers on multiple glyphs to switch between two different designs at different points in the design space; some of these glyphs are also used as components. I have not seen much documentation detailing the use and behavior of bracket layers when exporting to a vf especially when these glyphs are used as components. I am curious to see how others have been dealing with this and wanted to share my workflow for working with bracket layers in this context.


Workflow (for a single axis vf):


I’m hoping there is an easier/better way to do this, but this is what has been working for me at the moment