Hello there.
I’ve got two drawn weights of my font, Thin and ExtraBlack, and now I’m making sure my masters are compatible for interpolation. I’m getting stuck on the dollar sign, capital Q, and cent glyphs. I know they are unique in that they’ll change shape at specific weights to accommodate the increased thickness, but I can’t figure out how to use the alternate layers. Could someone help me out? I’ve attached a screenshot of what my dollar sign looks like.
Thanks. 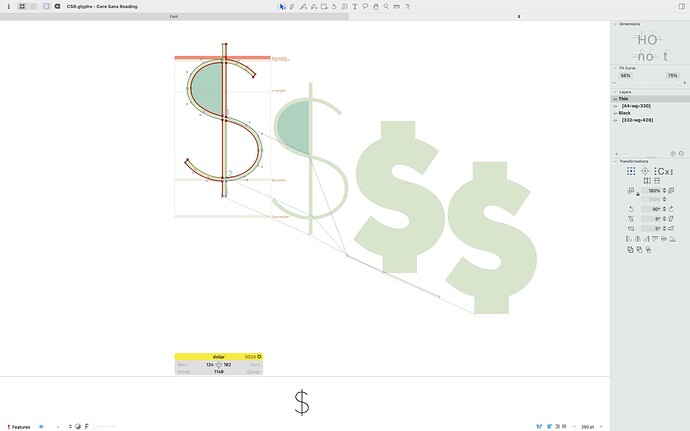 Have a look at the Switching Shapes tutorial:

Sometimes, a shape needs to change when it interpolates from light to bold. This is how you do it for static and variable fonts.

Thanks, but this is what I was trying to follow and it didn’t quite make sense to me. Unless I misunderstood it, it seems like the tutorial is for someone who is starting to draw their glyphs whereas I’m trying to reconcile two that I’ve already got. (I think I’m starting at a different point in the process than what is explained in the tutorial, and I’m not able to reverse engineer it)

One part that’s confusing me is, like, I don’t understand the layering. So, I’ve got my glyph, and when I make the alternate layer, I don’t need to make any edits to it, because it’s simply a duplicate of what already exists. And that’s what I intend for the glyph to look like. So then I ask myself “Well, why did I even make this layer then?”

The values you entered in the alternate layers are, like, wrong. Decide on one value where they should, like, switch, and use that value in both layers, so that in the end you have, like, for instance, [wg<330] for both.

Another thing: you still need to draw the masters for each version of the glyph, even if you might think that drawing the one that you won’t see in the end seems redundant. Glyphs still needs to be able to interpolate between these.

Thanks, I’ve fixed those values.
Are you saying I should draw the versions of the glyph on either side of the point at which they switch? So if 330 is the turning point, draw the glyph at 329 and 331, for example?

Ohhhhh I see! Thank you!