Hello there,
I found that the width for newly added glyphs is all set to 600.
(e.g when I add a new component glyph or vacant glyph.)
I’d like to change the default width. Is that possible?
I am actually designing CJK fonts, so I need to keep the whole width 1000.

Hi,
Sorry for being unclear-I actually didn’t have to mention CJK.
I know that CJK glyphs are set to 1000, but what about glyphs without CJK code?

For example, when you add a new glyph without Unicode but with a random name for random use, the default width is 600. What I asked was how to change the default width from 600 to anything else. I have to design a lot of non-exporting glyphs like corner component and etc, so it would be much easier if that kind of glyphs can also start with the width that user customized. This is a minor thing but just a suggestion or question.

I’m thinking about it. But didn’t found a good solution. It depends on the font and glyph/category. So maybe using the width of a default glyph for each script/category? Fully customisable would be cumbersome.

And the smart corners already get a smaller width in 2.6.1.

I fully understand. However, since there are a number of elements to handle in CJK fonts it is a huge thing to save time in a minor process. For example, when I add a new smart component glyph, the width is 600, not 1000 because the component itself is not CJK script. I have to design a lot of full-width component glyphs and at the same time, have to repeat changing the width from 600 to 1000. This is the reason why some of my colleague CJK type designers also wanted this feature.
I know it could be cumbersome but maybe in the future hope that we could figure something out.

There is a new custom parameter in the latest cutting edge version from yesterday: Default Layer Width. You can add it to the font or the masters.

Wow that was quick. It works fine, thanks a lot! cheers

It is not working in v.1211. The previous version was okey.

It is not working in v.1211. The previous vertion was okey.

I just tried, and it works fine for me in 1211. Which exact steps are you taking?

I tried it and it did work fine for me. What glyphs did you try to add?

Probably it is Japanese Kanji and Kana glyphs. (I suppose to another language’s glyphs as well) To take an example, [uni6C38].

The parameter is only applied to non CJK glyphs. Those get the UPM value by default. I see that is not the best idea. I either could add a localised version of the parameter or, I think the better way, look for a list of glyphs and take the width from them. What glyphs everyone will make first so that they could act as model glyphs?

I recommend to the following way, please refer screenshot.
Basically, [Default Layer Width] can define all of glyph’s default width, furthermore add new Custom Paramater if we want to define detaily the each attributes. (ex. [Default Layer Width] kata:1100, han:1200, hira:1300, half:600)
This behavior is similar to [CJK Guide]. I don’t know other language’s circumstances, but there are four main type of charactors made by Japanese designer [kana, kata, han, half]. 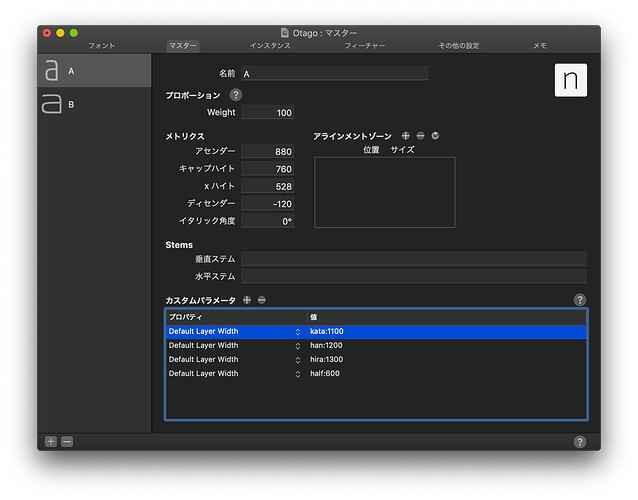 I was thinking the same.

As for Korean (Hangul) for your information,

I agree with the idea that allocating UPM value to Korean letters by default is not the best solution.
e.g. I keep UPM value as 1000, but my letters are not 1000 width (ex. 980, 940…) and this is quite normal among modern designers. 1000 width used to be a basic in the past, but people nowadays tend to prefer a little bit condensed one.

I recommend as follows;

It works fine for my environment from current update. Thank you for improving!