Class names starting with "@_" should be recognized

Glyphs (Version 2.4.2 (1037)) doesn’t seem to recognize these as classes because they are ending up in the Prefix section rather than the Classes section:

It does compile OK, which is why this is a minor bug. But these class names are valid by the spec:

The part of the glyph class name after the “@” is subject to the same name restrictions that apply to a glyph name, except that its maximum length is 63.

A glyph name may be up to 63 characters in length, must be entirely comprised of characters from the following set:
A-Z a-z 0-9 . (period) _ (underscore)
and must not start with a digit or period. The only exception is the special character “.notdef”.
“twocents”, “a1”, and “_” are valid glyph names. 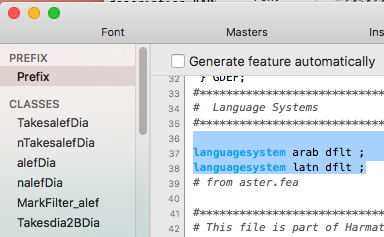 I’ll guess this is why there is no “Arabic” in the Edit tab Features menu: 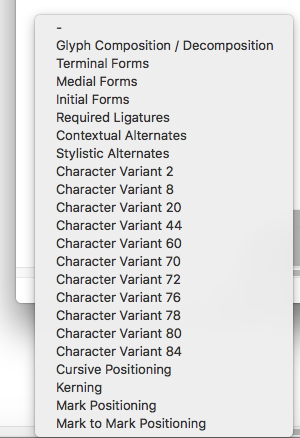 Fixed it. Thanks for the details feedback.

confirmed fix. Many thanks!