Whenever I launch Glyphs with Console opened I see thousands of errors that look like “Overlapping altName ‘controlCR’ in glyph data for glyph (CR).”

Is it specific to my glyph data or is this a known issue?

Would be nice to have a clean Console slate, makes starting up quicker too.

That is a valid error message; means that the altName controlCR is used more than once in the Glyph Data loaded at startup. You can ignore it, just updating glyph names for a font that has a controlCR in it may yield an unexpected result.

makes starting up quicker too.

I would be surprised if one console message makes a measurable difference in startup time.

It’s not just one message, it’s at least 3600 logged messages every time I open the app.

Is there a way to reset the glyph data to a pristine state so that these errors don’t show up at startup? 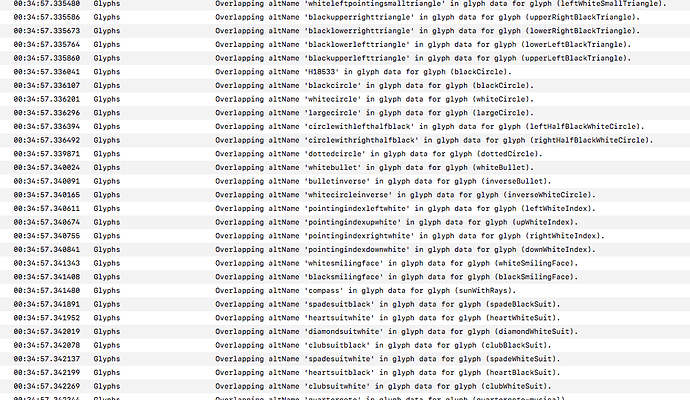 I checked the GlyphData.xml file in /Applications/Glyphs.app/Contents/Frameworks/GlyphsCore.framework/Versions/A/Resources and it’s unedited (dated July 18th) and I don’t see redundancy/overlaps in the XML.

Also checked the application support folder and didn’t find any GlyphData.xml file there.

I don’t know where these errors are coming from.

Do you have a GlyphData.xml file next to your .glyphs file?

No, no GlyphData.xml file anywhere near my file.

It happens when I launch the app without any fonts open too.

Could this be related to linking to the GlyphsCore framework from the plugin I’m developing?

edit: I removed all plugins and it’s still happening
edit: cleared the Temp folder inside app support, still getting errors

Look inside the Info folder in Glyphs’ Application Support folder. Next to the Scripts and Plugins folders.

I don’t have that folder. There are no GlyphData.xml files except the one that comes with the app’s resources

I monitored all GlyphData files accessed by Glyphs (and in another attempt all XML files) using:

That’s it. There’s no other GlyphData in my filesystem. Attached is the XML file.
It could be a caching problem, or the routine getting executed more than once, file read twice into memory, etc…

Sorry, I cannot reproduce with Version 1060.

Thanks, it’s worth reporting

I’ve just seen this happening in my console as well. I definitely got no custom glyphs XML on my machine. Just saying.