Adjusting the left side bearing of a letter using the ctrl + arrow shortcut in Glyphs does not work for me. I’ve asked a friend for whom it worked so it must be something on my end, but I’m unable to figure out what could cause the issue.

I have checked under Keyboard in system preferences and ctrl is not assigned to anything other than the default. It works like normal.

Any tips/tricks? The manual says “You can set your own shortcuts in the OS X System Preferences, under Keyboard > Shortcuts > App Shortcuts > Glyphs.” but I’m not sure how to get that to work.

For the shortcut not working, does Cmd-Shift-arrow keys work?

For shortcuts in Glyphs 2 you’d enter the name of the menu, as in this article:

If you’ve spent any time using Mac OS X, you’ve figured out that the Cmd+W shortcut key closes a window or tab, while the Cmd+Q key quits the entire app. The problem? The keys are right next to each other, and way too easy to accidentally hit! Here’s...

for submenus, insert “->”, as in
View->Zoom->Zoom to Actual Size

The Ctrl+arrows is used to Spaces shortcuts. Disable it, or set it to something else. 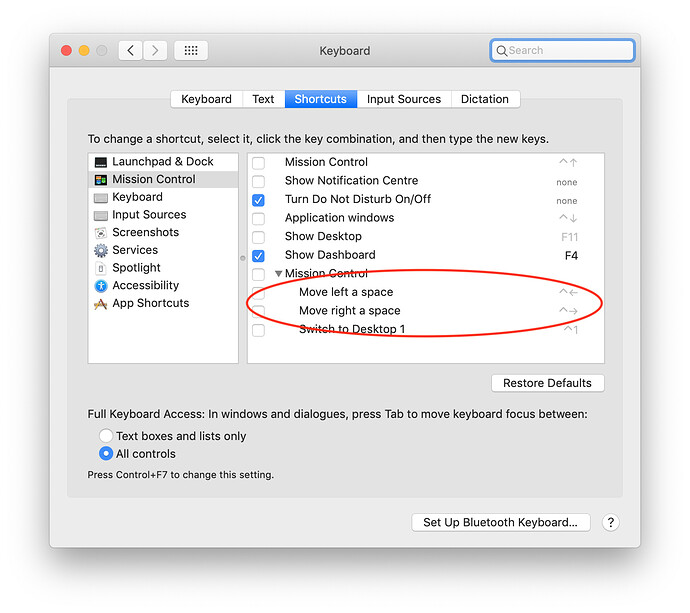 I had totally missed that. Thank you once again!

Is there a way to set a different shortcut for LSB (single steps: ctrl+leftArrow) and RSB in Glyphs, instead?

I don’t want to disable or re-assign the system’s “Move … a space”, as this is still needed by my programmable mouse (Logitech MX3). It recently took me ages to debug the mouse failing to do it’s job, just to realize that I had disabled these settings some time ago.

I rather not change that. The code is complicated enough.

What shortcut would you use instead? Can’t you change the Spaces shortcut instead of disabling it?

Not change, just make it accessible in the shortcuts preferences maybe?

If I change the system shortcut, I need to change it in the mouse settings to custom shortcuts as well for all occurances. It’s quite a cadence-rat-tail-can-of-worms to open. But probably I need to do that then.

The spacing/kerning keyboard commands are not individual shortcuts but are handled in the keyDown: method. I would need to add a action method for each combination … And again, what keys would you use?