Hello there.
I’ve switched from FontLab 5, to glyphs 3. Yes, I know it was a big step for me.

When I imported my old FontLab files, I was wondering about the multiple master design method. So my question it’s might be a bit basic: but what should I do if I want to make a Type Family with more weights.

So now I’m a bit confused. What is the best design method for multiple master fonts?

As soon as you know you’re going to want multiple weights, I would start adding in masters at the extremes for base glyphs. Working with your letterforms at extra light or extra bold weights will often lead to insights that suggest alterations to the Regular, in which case you’ll regret if you’ve already built accented characters, kerning pairs, etc. around the flawed versions.

I would put together the masters as early as possible. If only to be able to use the invaluable Font Remix Tools for Glyphs

Thank You @eliason and @GeorgSeifert for the quick reply.

Yes, I’ve started with my last (regular) FontLab file. And of course, I made the standard Alphabet and Numerals. (I made the 4 masters and I used the Impallari steps to calculate the weights) 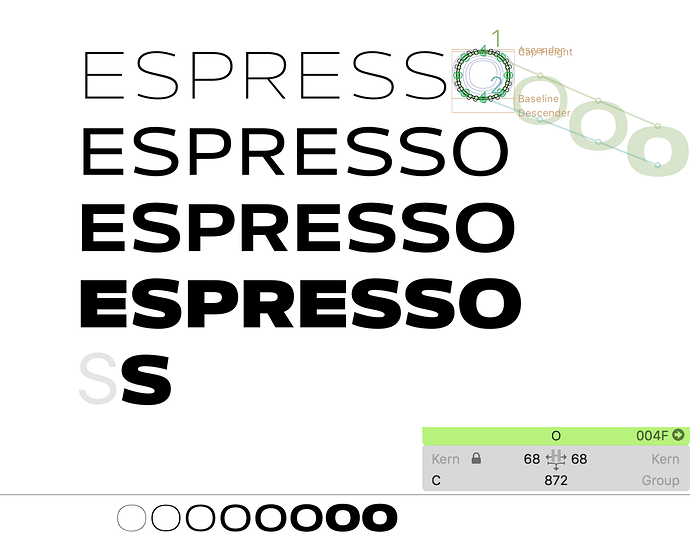 But the old FLV had the accented characters as well…
So should I delete these characters, and re-generate with the new components? I mean would be that the right step to move on, or should I make something else?

Certainly if you’re still editing shapes, I would think it would make sense to replace the accented characters with component versions. If your combining marks and anchors are set up right, it takes almost no time at all to regenerate accented characters.

I would strongly suggest to build all accented letters form components. As @eliason mentioned, that can be done with the command Glyph > Create Composite.
When you don’t have the combining marks, you can select the paths of the mark in an accented letter and do “Component from Selection” form the context menu.

And I’m pretty sure you will not really need the second master (maybe not even the third). You can add brace layers in glyphs that do need some adjustments in between masters.

@GeorgSeifert @eliason Thank You for the tips again!

Yeah about the second master, it’s the original Regular version from the flv. (so this is the weight which is already done) The 4 the master is the “odd one out” the Black version. (It has some different characters in style as the others.)

And I found here at the tutorials the Lazy symbol glyphs
So… I haven’t to make every symbol? (I tried to figure out how it works … but it’s way beyond my skills.)

found here at the tutorials the Lazy symbol glyphs

This is not working in Glyphs 3 anymore.

You can still be lazy with some symbols in Glyphs 3 using my script: font-scripts/Build basic math symbols.py at master · jpt/font-scripts · GitHub

It requires that you have /zero.tf /dotaccentcomb /hyphen /n so it can measure.

There are some other variables you can tweak too. I should really build a UI for that script so users can make adjustments without modifying the script itself