Often when I try to add a certain glyph to the editor view I use the Cmd+F Find command, which brings up the menu seen in the screenshot. It would be great if there would be some kind of visual indication if a glyph contains components or not. For example searching for “quote” illustrates this - one of my quotes has the path, and others use that one base quote as component. Alas, it would be great to see which one is the one without components / that has only paths. This could be a color, a little icon, anything at all. 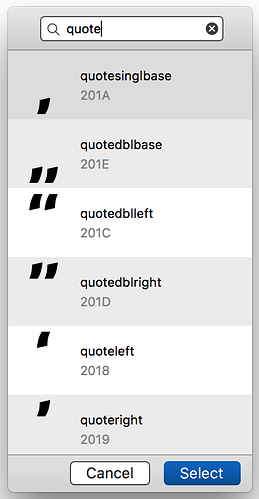 What do you think? Would this be useful or how much work?

Why do you need to know this?

I know from the font view you can filter like that, and I know when you open the glyph and it happens to be the one with components you can double click it to get the referenced one. I have this with quotes, guillemets, dashes and slashes that reference one “base” glyph, number variants (sub sup nom dnom) that reference one actual glyph - I’m never quite sure which one to add to the editor view to edit in place, then end up opening one from the list in the Cmd+F menu, clicking the components to get to the actual one with paths.

Or you simply double click one of the components. And that takes you to the original Paths.

Well, it is merely a suggestion for a subtle visual differentiation that would save one step of guess work. Maybe it’s too marginal to warrant implementation, but just because you can arrive at the same end result doesn’t mean it’s not worth communicating it via the interface in a more concise way.

Thanks for the replies

probably to prevent inception style depth of component nesting u have to click through till u get to the origin.

i was responding to georg what this would be good for