I was wondering if you considered implementing a zoom feature in the detached Preview Panel (much like the GlyphsViewer App) and even maybe in the Font Editor Preview window on the bottom? Sometimes I find myself dragging that drawer so high up that I don’t have enough space to edit anymore.

In the iOS GlyphsViewer App I can zoom in to a certain point, but I would prefer to be able to zoom in even more. Diacritics, for instance, tend to be rather smallish, even zoomed in at the maximum level.

While working on curves I often want to just have a giant preview of that curve on the second screen/separate window.
This is not efficient use of space 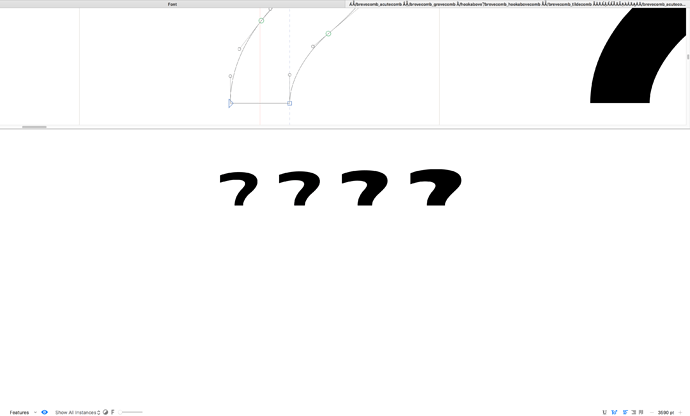 Being able to zoom out would also be good. When working on a font with lots of instances, wide glyphs can easily disappear off the edge of the screen. Rather than resing the window all the time it would be good to set the zoom at a level that works nicely for all glyphs. If that’s not possible, if glyphs are going off the sides, it would be handy to click and drag the relevant part into the viewport, as a kind of scrolling.

Is this topic still a possible improvement in one of the next versions?

Good news, then! Thanks.

I often use the Preview Panel on a second screen. I would like to switch to full-screen mode and have a feature to be able to zoom in and out instead of resizing the panel…just like it is in the GlyphsViewer App.

+1 for the requests above!!

Do you have an iPad? Try the GlyphsViewer iOS app. You can pinch zoom with your fingers.

I also use the Preview Panel on the second screen.
I would like to have a feature to be able to zoom in and out.

Or based on the left side of the preview panel, it would be great to be able to zoom in and out the displayed glyph according to the aspect ratio of the window.

I would like to use Preview Panel effectively because I don’t have iPad.

Did this ever get addressed? Having trouble finding any information online about this. If you can zoom in on the preview panel it is not intuitive.

As of now, you cannot zoom in the Preview panel. The size of the panel is the zoom.