I get this error when trying to export a variable font: “Can’t convert to compatible TrueType curves. Glyph ‘space’ is not compatible.”

I’m just getting to grips with the software so have deleted all the glyphs other than ‘A’ so I don’t understand why ‘space’ is throwing up an error. I’m running mac os sierra 10.12.6 and glyphs 2.6. 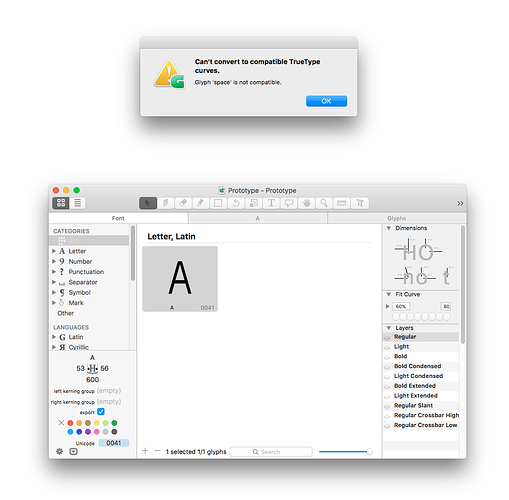 The space glyph is required, IIRC. Try adding it and then exporting.

Dave is right, a font must have space, like it need .notdef. Glyphs will autocreate a notdef if you do not have one, but we did not anticipate people trying to make a font without a space.

what is the function of the .notdef glyph?

.notdef is used when a desired glyph is ‘not defined’ in the font. A bit more information is available in an appendix to the OpenType specification, Glyph 0: the .notdef glyph.

Older versions of this same part of the specification also mention that this is the first of four glyphs customarily found first in a TrueType font: First Four Glyphs in Fonts, although this section appears to have been removed from the specification as of OpenType version 1.8, when the recommendations were moved into an appendix.

Ah, got it. Is the ‘shape’ that appears when a specific glyph is not defined in the font. So I can customise it, cool:

It is recommended that the shape of the .notdef glyph be either an empty rectangle, a rectangle with a question mark inside of it, or a rectangle with an “X”. Creative shapes, like swirls or other symbols, may not be recognized by users as indicating that a glyph is missing from the font and is not being displayed at that location.