I just downloaded the latest cutting edge version and when I open a UFO in it, a lot of points get distorted — on or off-curve — very strange!

It happens with every UFO I’ve opened, so take the UFOs from the IBM Plex project, for example: GitHub - IBM/plex: The package of IBM’s typeface, IBM Plex. 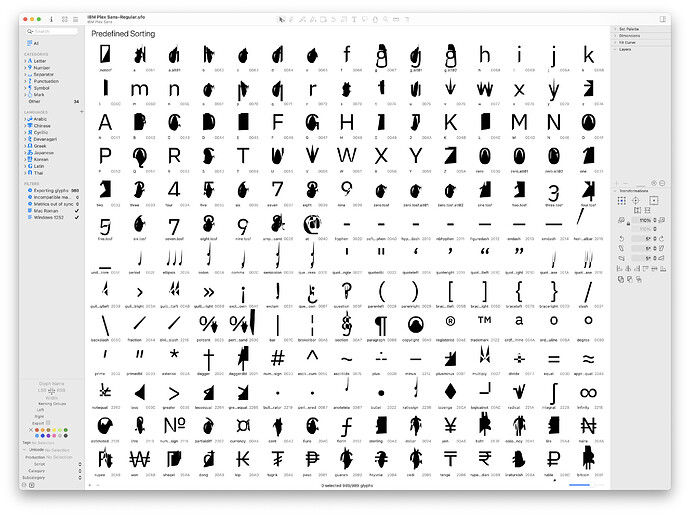 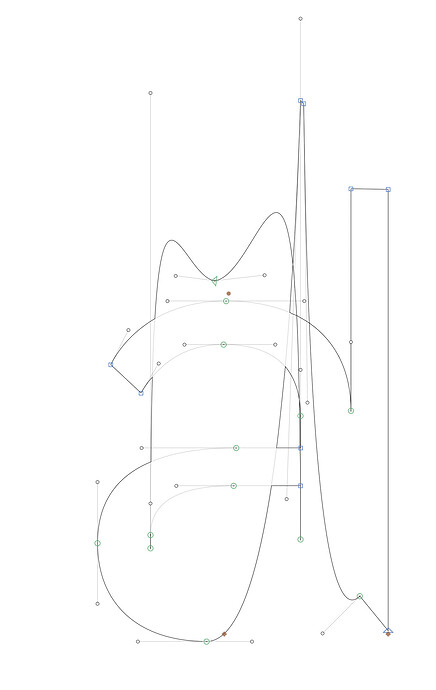 I made a diff of the two .glif files, one before opening in Glyphs 3.2 and one after saving it (Original is A, on the left — Distorted is B, on the right). It seems like what is happening is if the Y value has fewer digits than the X value, the last digit of the X value is appended to the Y value: 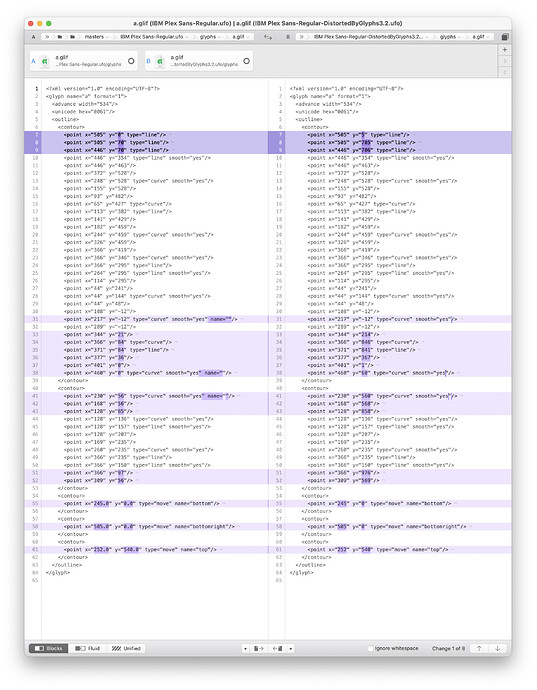 Attached are the two Plex Sans Regular UFOs — one before and one after opening in Glyphs 3.2. To recreate this issue, just open the “original” UFO in Glyphs 3.2 (3169).

(Note that the UFOs in the Plex project are UFO2s, because of the age of the project — I converted the “original” Plex Sans Regular UFO to UFO3 before opening it in Glyphs, just to compare apples to apples, but this bug seems to happen regardless of UFO version.)

I can’t seem to reproduce the problem. 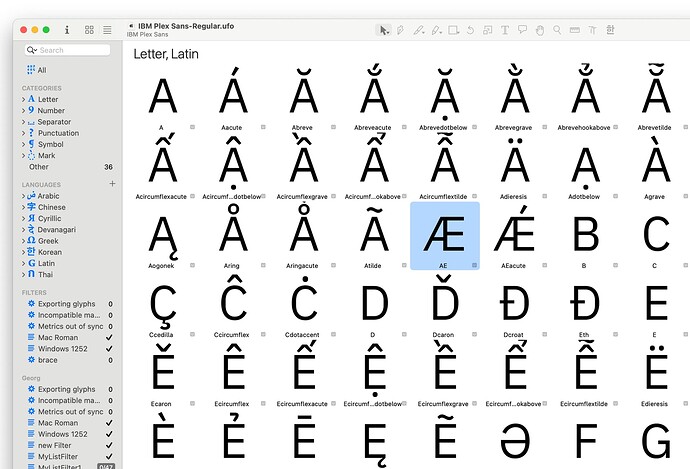 I downloaded the newest cutting edge version and I still does it with every UFO — Standard .glyphs files unaffected. UFOs open normally if I go back to the 3.1.2 (3151) “stable” version available for download from your website.

I’m on an intel mac with Ventura if that helps at all, additional info in the screenshot. I hope someone else on the forum with a similar setup might be able to open up a UFO with the cutting edge version to see if it’s just me or not.

Thanks for your help! 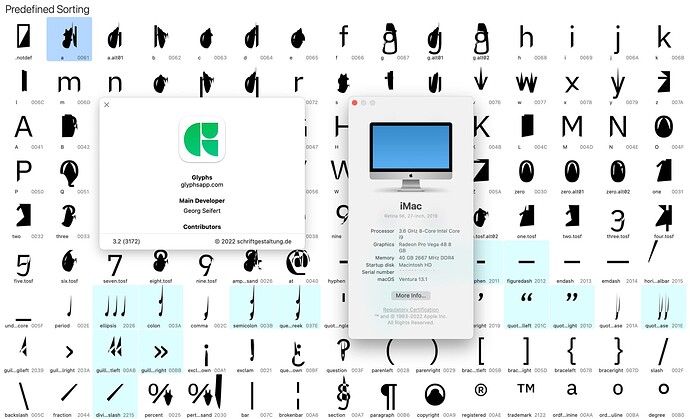 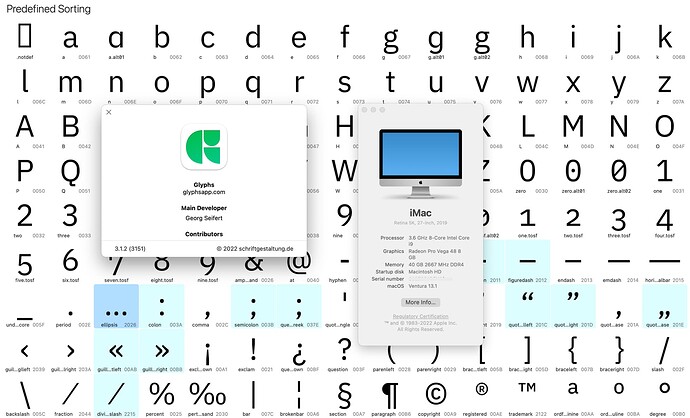 Here I’ve opened the provided IBM Plex Sans-Regular.ufo on the same version of Glyphs: 3.2 (3172), but the first screenshot is from a Mac where I had installed and used the previous alpha versions of 3.2: 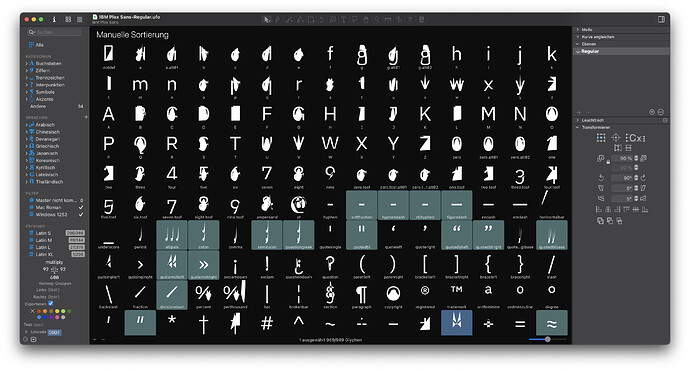 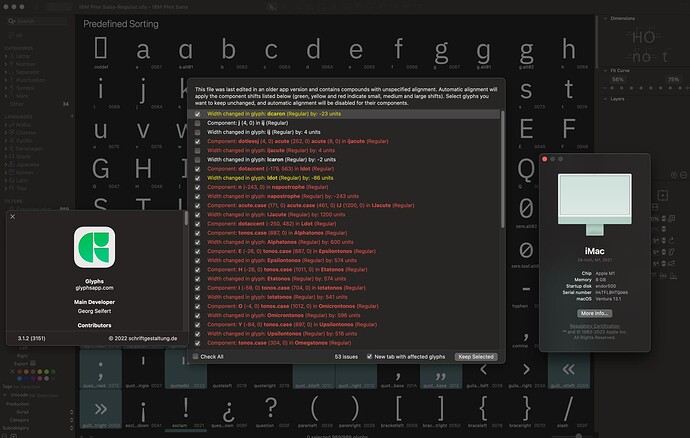 Well, nevermind now, since Glyphs will no longer open without crashing.

Your screenshot looks OK. These are not app errors, it’s just that the components are not all aligned properly in the file.

Well, nevermind now, since Glyphs will no longer open without crashing.

What do you see when Glyphs is launching now? Do you get an error message?

@luxuryluke did you send all crash reports?

@luxuryluke I fixed the crash you send (after I uploaded version 3173).

The problem was that the font has no name.