How to create the center of the glyph?

Hello! May please anyone help me? I’ve created a simple typeface just to proof an animation. If I let rotate a glyph around itself, it doesn’t move around its center but in glyphs it’s exactly arranged. Did I miss an adjustment I didn’t know about?

Hello Theresa, welcome to the forum, nice to have you here!

And what kind of animation are you doing? In which app?

thanks for answering and welcoming me! I marked the center I mean with a green circle for you. Like you can see I havn’t a x-height or descender… Its just the bounding box. The glyph is always situated in the middle of width and height. I did the animation in unity and a similar animation with processing – the same problem.
thanks for helping me! 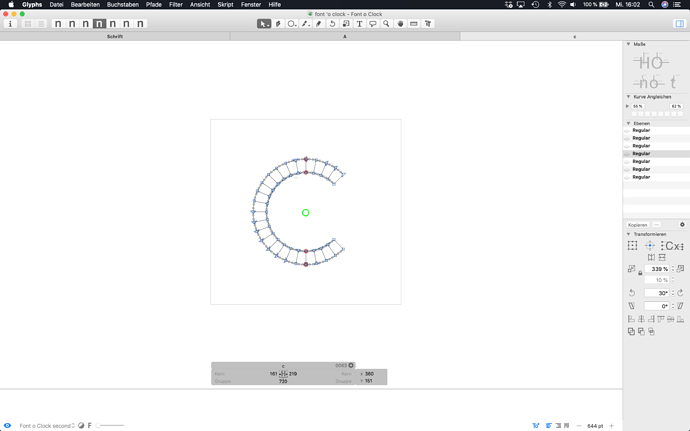 Maybe the center is the little cross I’ve marked with the red circle? How can I change this? 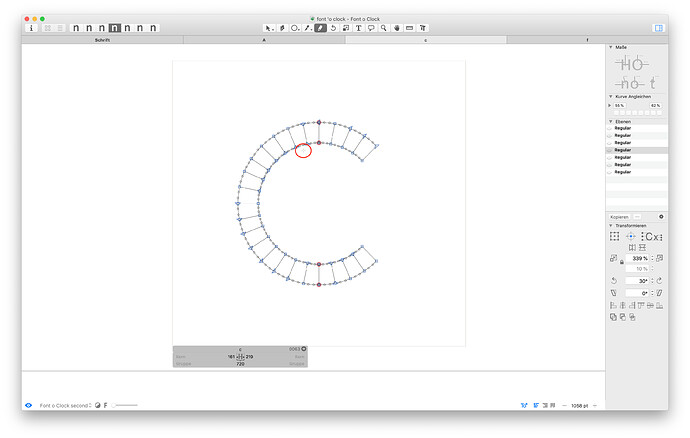 You can download from GitHub Mekkablue’s scripts that include “Set transform origin”.

You could also make the half circle a components (with the centre of the shape at the origin). Then the component rotation could be used.

I’ve tried it with the script, but this seems not to be the problem in the animation. Is there any other option, how programs set the center of a glyph?

It seems that you are exporting several fonts and switching them to make the animation. I would try to pit all “frames” into different glyphs in the same font. Then animate by switching the glyphs.

Every app and OS combo has a different way of calculating heights in a font. What the vertical center is supposed to be… hard to say.

Also, bounding box is a bad idea because your shape is not point-symmetric. What you seem to want is the center of the imaginary circle of which the c shape is a part.

I do not know Unity. But you can try exporting the vectors and rotating them. Or what Georg wrote, put all the frames into the font, and switch through them.

Tanks for answering me! To pit all frames into different glyphs is unfortunately no opinion. I need the whole alphabet… To export the vectors would be possible, but isn’t very neat. So you think I can’t solve the problem with glyphs, because its dependent on unity!? Fuck.

I need the whole alphabet…

Just duplicate the glyph, and change its suffix to .ss01, .ss02, etc., and do your rotation steps in the variants

Thank you! I think, this would be possible.