How to delete a glyph from a Regular master while retaining it in the Bold master (within the same .glyphs file)?

New to Glyphs, loving it so far. Not sure how to frame my issue here.

Currently working in one Glyphs file that contains two masters (a Regular and a Bold of a unicase typeface I’m working on). I had finished the Regular version before creating a Bold. Being unicase, I repeated the uppercase and lowercase glyphs. I was able to copy the Regular kerning pairs over to the Bold version. In creating new Bold glyphs, I’m trying to create alternate glyphs accessible via a stylistic set in other type-rendering software.

For example, there’s a (normal uppercase/lowercase) Bold “P” glyph. I’m trying to create an alternate “P” glyph with extra curves and flourishes. This alternative Bold glyph is labeled “P.ss01”. When I toggle over to the Regular set of glyphs in Font view, this Bold “P.ss01” glyph also appears there. If I delete this glyph on the Regular side, it’s also deleted from the Bold set (which I don’t want to do).

Is it possible to retain this Bold alternate glyph but eliminate it from the Regular set of glyphs? It’s meant to be a special glyph in the Bold font only. Thank you!

You cannot delete a glyph from a master and keep it on another. All glyphs belong to the .glyphs document, so when you add or delete a glyph, it is added or deleted from all masters of that document.

However, you can remove glyphs from only certain exported instances (font files) at export. Go to File → Font Info… → Exports. There, you should have a Regular and a Bold instance.

Add a Remove Glyphs custom parameter to the Regular instance and write a line for each glyph you want removed, like so: 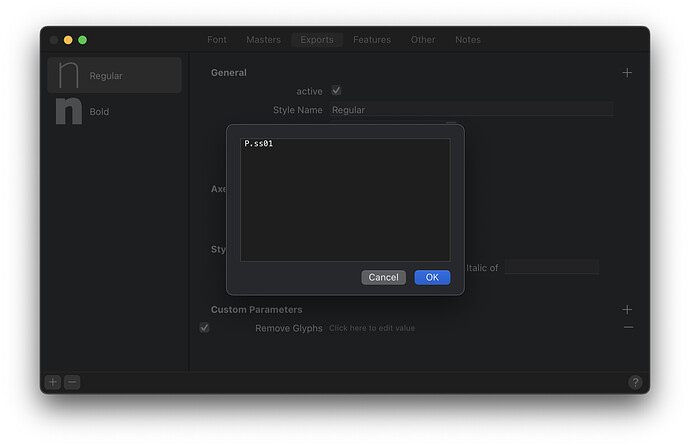 Now, the P.ss01 glyph will not be included when exporting the Regular font file.

You can keep the P.ss01 glyph empty on the Regular layer, or draw an alternate P similar to the Bold style so that you can interpolate a Medium or Semibold style, if needed.

Also, you don’t need to duplicate the glyphs for uppercase and lowercase glyphs if they look the same. Have a look at the following tutorial: Want to do a font without a lowercase? Read this for some handy tips.

@FlorianPircher THANK YOU for this amazingly quick and detailed response. The custom parameter solution works perfectly (along with your other suggestions which I will keep in mind in case my evolving type project changes).

And yes, that’s the same useful link that I followed to create my unicase font family—excellent!