How to do alternates display properly?

I did different alternates:

But when I select it in Illustrator it doesn’t suggest me alternates:

Please let me know if I do anything wrong?
Thanks.

You need to have an aalt feature, which Glyphs creates automatically if you use the correct suffixes for the OT feature you intend to use it in, e.g. .ss01 for the first stylistic set, .swsh for swashes, .fina for final positions, or .titl for titling variants.

I don’t know what you did (or didn’t) besides drawing an alternate glyph, so I’ll go step by step.

For alternate glyphs to be linked with a base glyph, you need to write an OpenType feature. Since your alternate looks like a swash version, I suggest using swash feature (swsh). Another option would be stylistic alternate (salt).

So, how do you do? The easiest way is to give glyph name a suffix and let Glyphs write features for you. If you want t to change its form when you click the swash button in Illustrator (i.e. use swash feature), your glyph name should be “t.swsh”. If you want to do stylistic alternate you rename it to “t.ss01”. After you’re done, open font info, go to Features tab, and click Update button at the bottom left. Next time you generate a font, you will see that swash button is clickable and the alternate available in the glyph palette.

I think what @blessedprint wants to do looks like a positional alternate. Please read this tutorial:
https://glyphsapp.com/tutorials/features-part-4-positional-alternates

Just a quick note;
I’ve tried the Titling OT feature; it was not not automatically added and generated by Glyphs; though it works fine by manually adding to the Features list.

not automatically added and generated by Glyphs

Update button on fonts info and Update Glyphs info did not help bringing it up Automatically !! 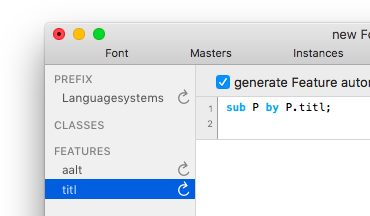 I had P and P.titl in the font and just clicked the Update button.

Or do you have custom naming enabled in Font Info > Other Settings?

I tested with Latin; it generates the .titl feature Automatically like you did with the letter P;
However the glyph I need is not Unicode defined … it is a custom one !
No worry… I’ll generate it manually !
Thnx

If the name matches the same structure XX and XX.titl it should still work.