How to export SVG font file

I’ve a client asking me for a svg file to use on the web. Is there a way to export it with glyphs? Can’t find it. Should I just use an online converter? 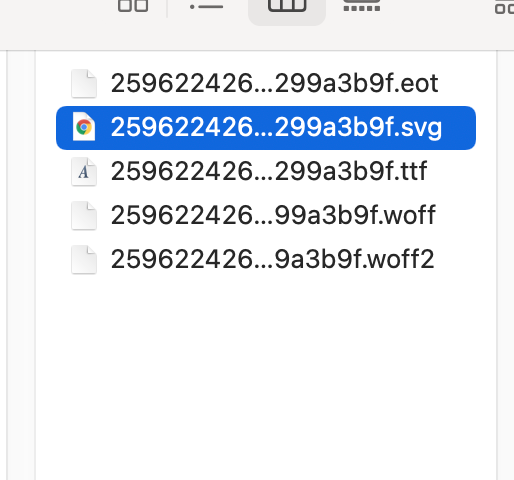 That seems to be an old .svg font. Those are not supported anywhere (they where used on the first iPhone only). So I’m pretty sure your client doesn’t need them.

Hi @GeorgSeifert
Yes, I thought the same. It’s the first time someone asks me that file. However, as you can see on the image, some foundries still ship that svg file. And I think that’s what might be creating that confusion.
I will explain him that. However, if I have to send it anyway, do you recommend any tool for that conversion?

Just don’t send it. It is a wast do space and time.

Make something up why it is not possible. The lack of kerning and opentype features is a good starting point for an argument in that direction

Hi Georg,
I was also asked for the first time by a client for an .svg file. The client is a branding agency and needs the .svg’s for an online brand management portal. Probably to embed brand assets like the brand fonts. If it is not a big hassle, I would rather do the export via Glyphs than convert with an online converter.

How is the client using those .svg fonts. I never heard of any use case other than early iOS webfonts.

Can you send me a sample of an existing ‘font’

I can only guess, of course, because I do not know your client. I have encountered similar situations in the past though, and it was always because they had seen the svg export option on FontSquirrel, never because they knew what they wanted. Same for EOT.

If it is not a big hassle, I would rather do the export via Glyphs than convert with an online converter

Won’t happen unless somebody writes an SVG font export plug-in. Glyphs is meant to create and export OpenType fonts, and SVG fonts are not OpenType fonts.

They are using Frontify for brand management. They said that it requires also svg’s. I have no idea if Frontify works without svg’s too (my guess is yes) but they wanted to make sure every format Frontify asks for is uploaded. I found this article which show that they implement the svg’s too. How to Use Your Own Brand's Fonts in Frontify | Frontify Knowledge Base But it seems very likely that it works quite well even without svg’s.
Initially I was just wondering if you have something lying around that would allow to export directly from Glyphs. If not, no worries.

If they insist, do a quick and dirty conversion with Fontsquirrel: Create Your Own @font-face Kits » Font Squirrel

Do not worry about testing EOT and SVG fonts. They will never be used.