How to keep the background font displayed on the font main page.

Hello, I’m very happy to come to the forum to ask my first question. My question is mainly about the design and production of Chinese fonts. After pasting a component into a font box, I switch to another font box or return to the main page of the font, and then the background characters disappear. Therefore, I don’t know what character is in this position.
Look forward to your reply.

The placeholder image would be in the way of your design. Better use a plug-in like Show Character from the Plugin Manager.

Thank you. This plug-in has been used all the time, but it does not solve my problem. Once I return to the font main page or switch to other font boxes, the glyph displayed by this plug-in will disappear.

Then the plugin has a bug. We’ll have a look.

Do you see any error message in the macro window?

I didn’t see any error message in the macro window.
The plug-in may not have bugs, it is just only not what I need。
I just want to keep the background font displayed on the font page, like this. 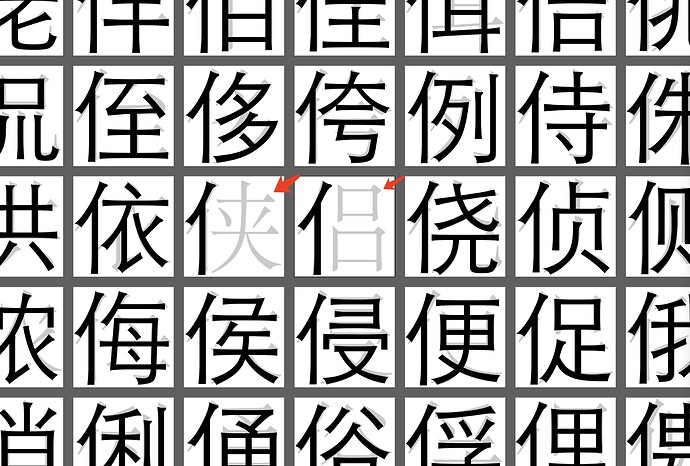 When you run this in the macro window:

You will see a small character in the corner.

I think this display is too inconvenient, and when I zoom out, it disappears.
Expect better tools.

The plug-in only interacts with edit view.

In font view, as long as the glyph is empty, you will see the placeholder glyph.

The function you are asking about is not available. I was just explain a possible other solution.

Can you explain why you need to see the placeholder in font view? It looks quite confusing to me.

I have asked a few other Chinese designers to comment on this.

For short. Yes we need it.

CJK designers have too much glyphs to hold in single file. When the project grow up, it will be harder to find the glyph we want via font view.

As the pic above, we often complete a part of a series of glyphs in advance, such as:
the left component(木) in “根” “楃” “㭇”… But after we added the left components. All of them just look same. The only difference in small scale UI is the glyph names (in Unicode).

As human, we can’t read it directly. It made us always sad on the font view. The font view overlay with another font will be a smart solution. If possible, we really want a UI option to swap the glyph name with the glyph string.

Maybe we can use the search tool? Yes, and no. It’s really too much Chinese characters in the world. We can’t read/spell/write all of them. Chinese input method depends on your understanding of characters. We often can’t type the chars we want to find.

It is about the working flow for at least a Chinese font. The efficient way is to build smart components and batch paste to all characters who have these components. When glyphs are not completely assembled, they are not recognizable in font view when you browse them. That’s why we need a solution.

Some Glyphs designer don’t know the basics of Chinese fonts, which will be learnt as a child in kindergarden.
Such as :
1: words should be centered within the bounds
2: We started writting by imitating on the existing copy.
3: many components have same pronuciation, so we need many component files suffixed by 1,2,3…
4: …
5…
6…

Maybe a way to solve this issue is to have a sketch (an image) in the window that remains after one part of the glyph has been drawn. I use imported pencil sketched images, which disappear in the font preview tab once I’ve drawn part of the character, but I can see the sketched image when I open that glyph later to draw.

It appears that what the designers who are using “q” to create their characters are doing is moving one of the components into the drawing window early in the drawing process. There is another solution which would be to modify their workflow. 1) render [draw] all components. 2) build the complex glyphs once all the components are rendered (drawn). This means a change in workflow.

I am building a typeface from 2000 year old scripts and there are some basic primitive shapes in most of the glyphs. I’ve altered my workflow to accommodate.

I added API to allow a reporter plugin to draw in the font view. And I made a sample plugin that uses that and draws the preview.

nice! what is the name of the plugin?

It is not published, yet as it required the new version that is not out, too.

As a Chinese Type designer, I am looking forward to the release of this feature