Hello there, I am working on a Unicode standardized Śāradā font (a Kashmiri regional script, which is related to Devanāgarī, Bengali and other South Asian scripts). I would like to know, what I have to do exactly in order to have a proper akṣara construction with the i-Mātra.

Till now I have set anchor points both for simple consonant syllables as well as non-vocalized ligatures (on the left side of the glyph) and the i-Mātra (on the right side). I have defined the bases on which the i-Mātra shall be applied (within the Features > Prefix via markClass / feature mark / @BASE / @MARKS / table GDEF). I have tried nonspacing as well as Spacing Combined, and the latter seems to come close to what I want it to look like. The strange thing now is, that some additional space – I would need for the i-Mātra left of the glyph – remains as some empty space at the end of the syllable and the i-Mātra itself collides with the preceding syllable (see screenshot attached). 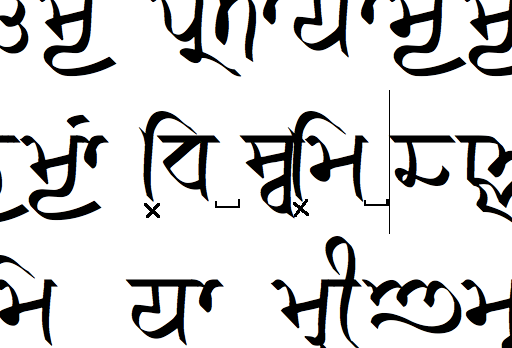 I hope, I was able to explain, what I am talking about here? Please let me know, if you need any further information, and thanks in advance

Where are you testing this?

Can you send me the font and the sample document?

thank you. I’ve sent an email with sample text and font file

There are several things that can make your live much easier.