When first starting with Glyphs around 2015 I had to deal with old Glyphs files, which had the problem of unspecified automatic alignment, which required figuring out what to fix and what not to fix. But at the time that meant files that were a year or more old. This morning I get this message with yesterdays file, after updating from 3146 to 3147:

I am in the middle of drawing italic capitals, with the upright as starting point. So maybe that is why the composites are a bit messy. But I do want to keep the automatic alignment. That means manually unchecking about 180 check marks. If I don’t, then I will have to mouse-click to automatic alignment 180 times over once the base outlines are done.

Therefore I would like to suggest to skip the older version check if the app version differs less than 2 or the file is less than 24 hours old. Alternatively there might be an Uncheck All option in the dialog, next to the Check All.

When you change the spacing of a base glyph or an anchor position, not all components are updated automatically in real time. Normally, the auto alignment should be triggered when saving the file (to avoid the dialog you are getting).

And the dialog is only displayed when the version number changes. So you can collect some of the misalignments and only get the dialog when you update the app.

Can you check what happens if you check all boxes? Is it moving the accents to the right spot? (check the “New tab…” box to get all layers that were changed).

It does what the dialog says it does: For example in Edot and Ecaron the components look neutral grey instead of greenish grey. The accents are positioned, where the anchor points might have been, before they were last moved. If I re-activate automatic alignment then the accents move over to reflect the current position.

I am back to 3146: When in the Font view tab I click on the characters with displaced accents, they snap in place.

Most anchors are simply centred in the advance (taking italic angle into account) with a Python script after I set the advance. Might that be a reason why Glyphs looses track? For any composite of which the layer is in view, I can see the accent move, so it seems to work. Of course I do not always check all combinations all the time.

I meant you should make sure all checkboxes in the first column are checked and then see if it looks right.

I just tried and moving the anchors and saving the file should store the updated values. Maybe the script is messing up the automatic update? A missing enableUpdateInterface() could be causing this.

I will try enableUpdateInterface(). But according to the documentation, it is to cancel a counterpart that disables UI drawing, which I don’t use.

There does not seem to be a real world problem. Most composites use automatic alignment. For some combinations it is disabled, when the eye decides to override the algorithm. By the time a font is generated, everything that is using automatic alignment is looked at and in its place. It is just the check when updating app version that is distracting. I had to make sure the UI touches all composites in 3146, to prevent complaints from 3147. That way I avoided to uncheck 180 check boxes to keep automatic alignment.

You can un/check all boxed by the checkbox below the table.

And can you send me the file with the miss aligned components from Verizon 3146?

File is on its way.

I did not realise I could use the “Check All” setting, to uncheck all (silly me). When I continue with all warnings unchecked, everything is just fine. But continuing with all checked, would have created a file where the automatic alignment setting would have to be re-activated for the listed composite layers. So hopefully you can find a way to distinguish between alignment issues from real old data (from Glyphs 1 and maybe the early Glyphs 2 versions) and some temporary storage glitches.

There is no way to distinguish the course of the miss-alignment. But I improved the code that is there to update the alignment when saving the file. So those changes should become less frequent, soonish.

The following issue may or may not be related:

When I move a mark left-right in relation to its mark-anchor, then in composite glyphs with automatic alignment the left side bearing values aren’t properly updated in the information box. For example in the following image : I can move the macron around a lot, while Glyphs displays the original values of -9 and -11 regardless. If I close and re-open the file, it displays OK. But I don’t know if the values are re-calculated when saving or when displayed for the first time after opening. 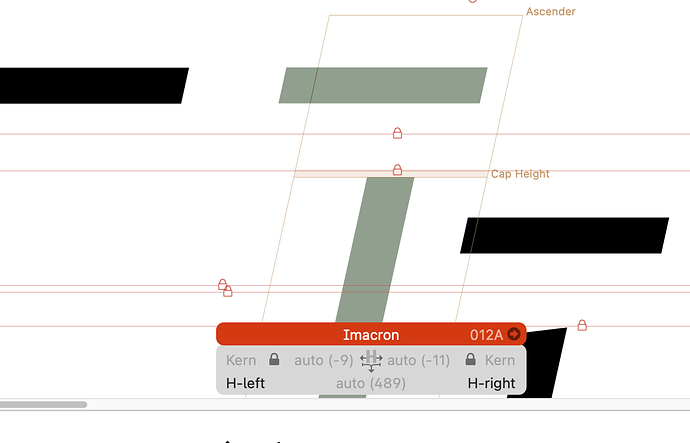