Please do not group Tamil, Telugu, Kannada, Malayalam, Oriya languages under “Indic” and please do not label Indic with “दे”.

Please do not take away the liberty of Tamil, Telugu, Kannada, Malayalam, Oriya which have nothing to do with Devanagari script. They are all independent scripts, they existed even before the word “INDIA” was coined. 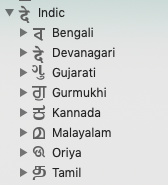 About the term: I agree. We have been using the term Indic in the sense of ‘connected to the Indian subcontinent’, but that is too imprecise. The term that has been suggested to us was ‘South Asian’. We are considering this change.

About the symbol: The decision which symbol will be used has nothing to do with how old a writing system is. In this case, the symbol was used because Devanagari is, as far as we understand, the most prevalent and most frequently used script in South Asia. If you have a suggestion for a symbol that better fits the purpose of representing ‘South Asian scripts’, we are happy to hear it.

But please, do not mistake politics with writing systems. A writing system by itself is not ‘oppressing’ and ‘killing’, and also cannot be ‘insulted’. Remember this is the forum for a font creation software, this is not a political forum for discussing which languages or scripts should be used by whom, or who or what should be liberated. IOW this is not the place to discuss the question whether Devanagari should be used less in favor of other scripts or not.

I would request these scripts are listed directly under languages.
Move the filter groups above languages.
Languages group could have a longer list.

If you would prefer to group under south asian. then a globe icon would be more appropriate in my personal opinion.

-------Only for information purpuse------
FYI: The goal of Indian govt is to replace all the scripts existing in India with devanagari and all languages be replaced with Hindi.
Indian govt has already eliminated Bhojpuri, Rajasthani, Maithili, Santheli, successfully since 1947.
South India do not understand Hindi nor can’t read and write devanagari script, but all banks, railways, highways, govt services are provided in only Hindi language.
I am not a font maker by profession, I have plunged into font making only to support my language in Computer. To liberate my language in a small way I can.
------If the above is inappropriate to this forum. My apologizes. I will remove this portion. Please let me know-------

Thanks for your input. We will discuss internally.