.init and .fina forms not showing up in Illustrator

I’m really new to font design so I’m not sure if I’m just not classifying things correctly or what. I’ve created several Initial and terminal forms for my font that aren’t showing up in Illustrator unless I right click the letter and select the alternate. I was looking for those forms to automatically change as they do in the preview panel on glyphs
I also am confused about what to label alternate initial and terminal forms. I tried s.fina.01 but that’s being overwritten by s.fina even with the code
sub s.init’ [a c d e g o q a.alt01 c.alt01 d.alt01 e.fina a.fina g.fina e.alt01 g.alt01 o.fina o.alt01] by s.init.01; 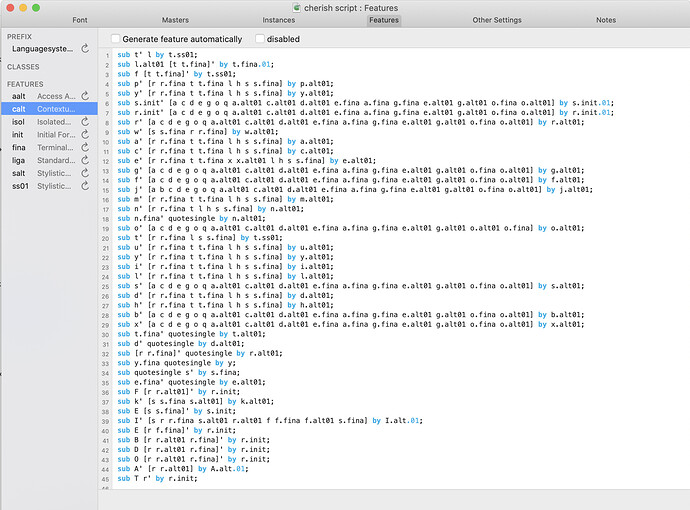 You need to add a calt feature. The positional features are only for Arabic and similar connecting scripts. Take a look at this tutorial please:
https://glyphsapp.com/tutorials/features-part-4-positional-alternates

Multiple features for one glyph: If you want to use the feature code automation, keep the suffixes in the Order of the features as they appear in Font Info > Features.

Okay. I do have the calt feature in use. Is it possible to have multiple contextual alternate glyphs like s.init nand s.init.01
I have the latter coded to use when in connection to other following glyphs. I believe I wrote the code correctly but it’s not showing up in illustrator unless I select it from the glyphs menu. Is this a unicode issue? When in Illustrator, it doesn’t show it as a init form in the glyphs panel. Should I name it something else like s.alt.init instead?

Yes, you can have all kinds of contexts. But I cannot spare you from digging deeper and learning OT feature code, so you can write your own code. There are a few tutorials on this website that should get you started, and there are many more resources on the internets, most notably the OT Cookbook.