Is it possible for Option-Arrow to move open node and retain angle?

Here is an example of how it would be useful for Corner Components. In this basic curve, there are 2 open blue nodes and 2 handles. 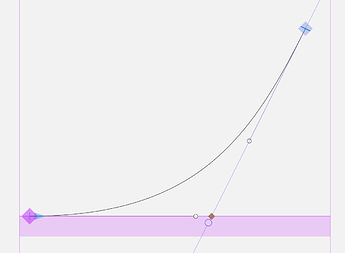 If I select the handle that is at an angle and use Option-Arrow Up/Down, it follows the angle between the handle and node.

If I move the blue node with Option-Arrow Up/Down if goes straight up and down. What I anticipate would happen is that it would follow the same angle.

I know I could add an additional smooth green node in between that would allow for this type of movement…what I am wondering is if it would be possible to achieve that with this type of outline? or to add this functionality to the Option-Arrow shortcut?

Will think about. The problem is that, due to the grid rounding, it becomes increasingly imprecise the shorter the handle becomes.

Would it be the same grid rounding and level of precision moving Node → Handle as it is Handle → Node using Option-Arrow?