Is there any way to show named glyphs in the feature panel in the font window?

You can Option-click a glyph name in the feature code editor to show its image, if that is what you mean.

No it isn’t what I mean. I want to see all the listed glyphs in a feature in the FONT window.

Of a class or mentioned inside feature code?

Ideally I’d like to be able to mark the contents of the panel so they show as a colour in the Font window, so they can be easily selected. 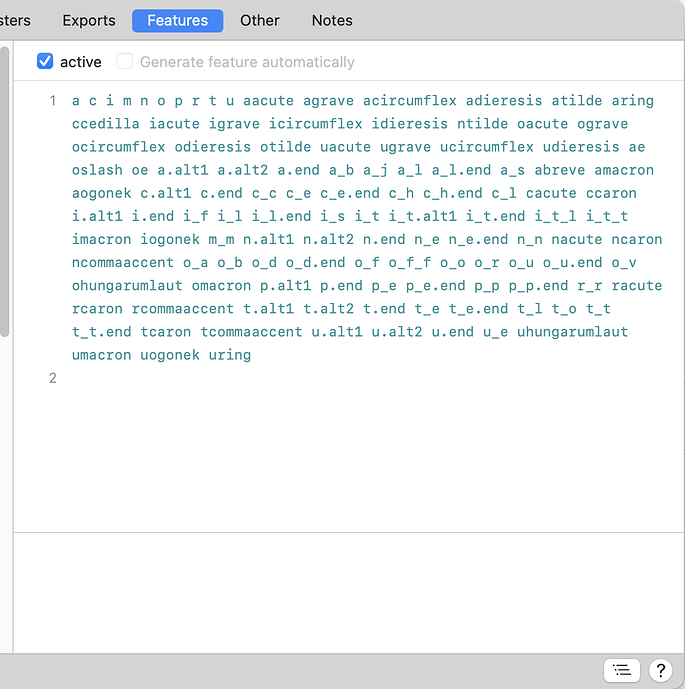 If you want to manage a set of glyphs in both Font View and as a class in the Features tab, consider assigning a common tag to the glyphs. You can use a Smart Filter to show all glyphs with a certain tag and use a token to include all glyphs with the same tag in a feature class.

I’ll have to look into this in a tutorial. I’ve never used any of those. Thanks.

Have a look at chapter 3, Using Tags, on page 9 of the Guten Tag Handbook for an overview of both Smart Filters and tokens with glyph tags:

The glyph preview popup could contain a context menu to select that glyph in Font View or add it to the current edit view. I’ll have a look

That would be great Georg. I’ve opened up an old font created in Fontlab that’s a complete mess. I need to see classes and features in edit view to understand what’s going on.

You have tried Option clicking the names/classes?

So when you hold down the Option key and click a glyph name, you don’t get a popup? What version of Glyphs do you have?

Oh, yes. Just one glyph. But that’s not much use.

Right click on the name of a class in feature code and you get them all.

But I’ll see if I can come up with a script.

Edit: there already is such a script

it’s called New Tab with OT Class and it’s in the mekkablue scripts in the Features submenu.