To keep it simple, let us say we have an Arabic and Latin typeface in Regular, Italic, Bold, and Bold Italic styles. It was decided to make the Arabic Italic slant to the left with the flow of the Arabic script RTL while keeping the Latin slanting to the right with the LTR direction.

The Arabic and Latin character sets exist in the same file.

For the Latin, all work well with the rendering of the correct styles and the link to the B and the I buttons. The correct Italic, Bold, and Bold Italic work.

For the Arabic, the Bold works well, but the Italic and Bold Italic don’t render the correct Arabic Italic letters and instead, a slanted version of the normal Arabic appears. 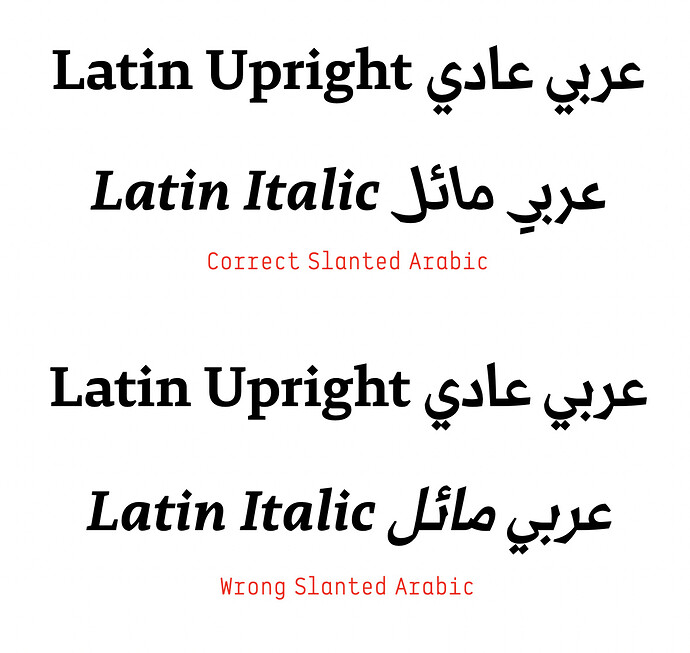 Is there a need to add any custom parameters for the Arabic Italic style to inform MS Office Apps to use the drawn Italic Arabic instead of slanting the Normal Arabic?

Is there a way to solve this problem while keeping both scripts in the same font? Or the only way is the split the Arabic from the Latin and give it a name different than Italic and not to link the Italic to the Normal style?

Additional info, for styles that are not Regular and Bold, like Light or SemiBold, the correct Italic Arabic for the styles appear is selected manually from the styles menu and the “I” button is deactivated after.

Thank you in advance for any suggestions.

Does it work correctly if you split it into two fonts?

I have not found any Original MS arabic fonts shipped with real italic glyphs.

I also tried to give it different names to see if I can trick MS Office not to activate the “I”, but didn’t work. I tried Slanted, Cursive, Freehand, Informal, etc… but for some reason, it still knows that these are italics. Maybe it is from the italic angle input.

Is there is a way to make MS Office not activate the “I” automatically?

It might look at the italic angle or the “isItalic” bit.

Placing the “Italic Angle” value to 0° removed the automatic activation of the “I”.
So this solves it.
Will the italic styles functioning properly though with the spacing and kerning even if the angle is placed at 0°?

What about the “isItalic” bit?
Where can I activate or deactivate that in Glyphs?

The spacing and kerning is fine. The slanted sidebearings are only calculated for the UI.

Amiri has an Arabic and Latin that slant in the opposite directions, it used to work on MS Office but it was a while since I last tested it and I can’t test it now. Can you check if it works for you? If it does then it might give you a hint why your font is not working as expected.

I have downloaded Amiri and tried to test it in MS Word.
Same problem. In the slanted, then Arabic is being slanted to the right from the upright instead of placing the true Slanted Arabic which is slanted to the left.

I guess it broke at some point then, it was a while since I tested this on MS Office. FWIW, other Windows applications seem to handle this just fine.

Please report this to Microsoft. The font people there are listeing to stuff like this. And sometimes they even can get it fixed

I would ask @aaronbell or Rob McKaughan?

I’ve reached out to Si over at Office to see if he has any ideas. Meanwhile, if you could message me your contact info, I’ll put you in touch directly so you can share your font file with him for investigation.

I suspect that it might just be a font linking issue, but don’t really know if there’s any special behind-the-scenes behaviors of Word with Arabic.