Kerning clashing diacritics - 'i dieresis' and 'i circumflex' etc

Hi, just wondering what is the best approach to kerning diacritics for ‘i’? Should i worry about the diacritics clashing? I have been looking at a few other typefaces and notice that there are not kerns for the ‘i’ diacritics when they appear next to each other eg i circumflex followed by i dieresis etc. I understand this might never occur but wondered if it is worth kerning in case of an abbreviation etc?

Thanks in advance for any help.

Do you mean cases of two diacritical i’s next to each other? As a general observation, two same diacritical letters is the most common combination, and íí ìì happen a lot (I’m skipping those here because they are less dangerous). Below are what I could find on the internet, but I have not checked if they are frequently used, in which language, or even it’s a real word. And I think combinations outside these are less likely exist. îî seems to occur in Kurdish language though. And, although I’m not including it here, įį can occur fairly frequently too.

Yes, you should worry about clashing diacritics. What I do is make a narrow diacritic version to fit on narrow letters when needed.

Thanks both - that is really helpful. I’ll get kerning!

For cases like this, I use the mekkabue script Kerning > Auto Bumper, e.g., with these settings: 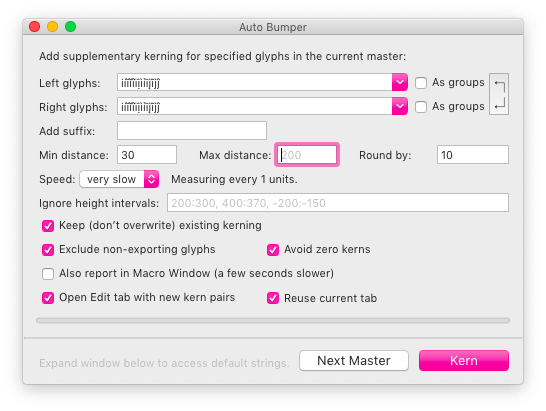 Depending on the design, kerning in those cases often creates big holes and it looks even worse than clashing marks. It’s better to draw really narrow marks for i’s and/or add contextual alternatives for certain cases. Just an opinion

Thanks for all the advice. I am now drawing narrow diacritics for the I and i. to avoid big gaps between glyphs. Many of the typefaces I have checked don’t seem to accommodate for the i dieresis clashing with each other - either in kerning or by giving them their own narrow versions.

Again - many thanks to you all for the help!

Where did you find those words? I just tried to google them and for most of them, this page is the only hit.

I search for each word in Google and maybe half didn’t show up at all. The words, that where known to google more then once, had those pairs: îî, íì, ïï, ĩĩ.