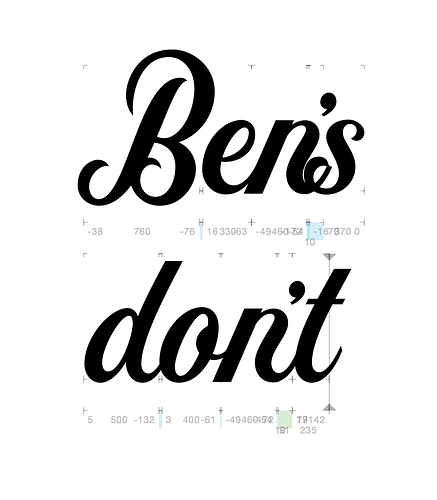 I’ve got all my apostrophe kerning looking nice (could’ve, wouldn’t, Nicolas’s, Erin’s, Mom’s etc.). There is just one grouping left that I’m unsure how to solve, “n’s”. If I adjust the kerning for n’s, then n’t looks messed up. Is there a good solution to this? Perhaps making n’s a ligature? I tried this with my limited knowledge of ligatures I’ve read about in the Glyphs blog, but it seems putting a ’ into the code makes it go crazy. What should I do?

The best answer is this: if an apostrophe goes between two letters, then the letters on either side should not be connected. Use of the apostrophe generally indicates a contraction so one would not expect the letters to connect. In fact, given the design you have, I wouldn’t kern the apostrophe at all, or very minimally.

That would be the “easiest” solution. However, my demographic is designers, and having the letters not connect looks a little cruddy. Think of the Campbell’s logo for example, it’s nice and connected. Like I said, I’ve got it working on every other combination, so it’d be nice to have all 100%, not just 99 haha

@nick_fred, that is your choice. Bear is mind that the Campbell’s logo is just that, a drawn logo. In cases where an apostrophe would be needed, an alternative approach is to have alternate letters on either side which don’t have connecting strokes, to minimize what you perceive as cruddy.

That’s a good point. I think I am underestimating my customers ability to adjust things themselves haha. Now that you mention it, I’ve tried about 10 different popular script typefaces, and none of them have a connection that I’m looking for. I thought there would be a way to do it, but it’s good to know that’s not something that is a deal breaker when selling this typeface. Thanks George!

Hi @nick_fred, you can try contextual kerning, I thing that will be the best:

Josh, first of all it’s good to see you made the switch over to Glyphs!

Secondly, you are brilliant!! I basically had the same concept in my code but rather than typing out “quoteright” I was actually typing the symbol itself, which was not working. This did the trick! Thanks a ton man

Thanks everyone else too, I learn things every time I post!