In the latest release it stopped working properly. From time to time when you are using it on a shape, it connects corner point of a shape A to a corner point of the shape B.
Here is a screenshot explaining the issue 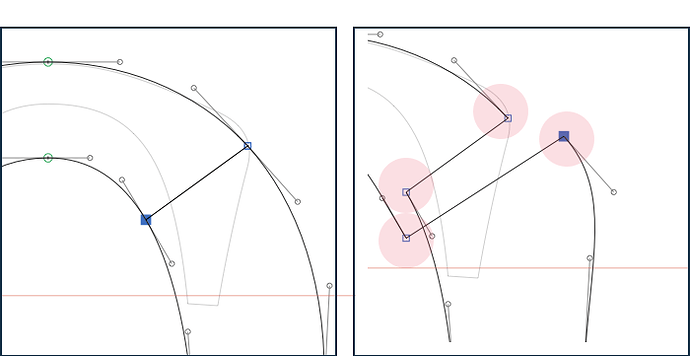 Figured this out. If you are trying to cut an open shape it does this thing… All looks fine if the shape is closed.

Can you show a screenshot as it was before but showing the whole paths?

It depends on the path’s direction.
On this one it’s all messed up

While on this one it works perfectly fine:

If the path is closed, the direction doesn’t matter

Also, when you cut across a single segment (which has to be a curve one in order to be cut across), it only adds a node and doesn’t actually split. It’s a long-standing one which I am eager to see fixed.

it only adds a node and doesn’t actually split.

Agree with @Tosche Knife tool should function as splitting/cutting tool;
Otherwise adding nodes with the pen tool would give the same result.
Looking forward to a more efficient Knife

in the upcoming Version 3.