Knife tool to slice a segment

Is it possible to update the knife tool so that it can cut through a single segment? It works fine when you are slicing multiple segments, but doing it on a single segment only adds a node as you can see in the screenshot. 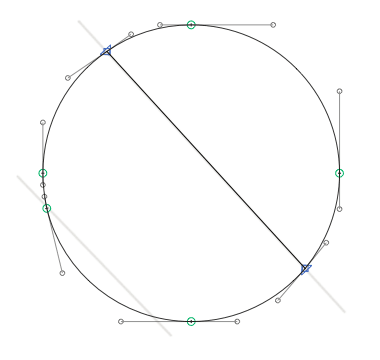 I see the problem. I’ll fix it.

Is there any key I can press when using the Knife tool (on a circle like the above), that would only add the points to the segment instead of actually cutting the shape in two?

If you only cut a segment and not the hole shape, it only adds the points.

I know that, but if I have a shape and I want to add parallel points to both sides of it without cutting it in half. So it would be cool to have a key to press while using the knife tool that would do that.
This would be useful for fine tuning of a shape when extremes are not doing the job… being able to add a mirror point to the other side of the shape too.

If you only cut a segment and not the hole shape, it only adds the points.

It actually only add one point to the segment.

On another note, what rebu suggested should be helpful. (using the knife to add points instead of cutting).