I’m starting to learn to script on Glyphs with this tutorial Scripting Glyphs, Part 2 | Glyphs

I have Glyphs 3 and Glyphs 2. But, it seems that accessing paths doesn’t work on Glyphs 3 but works in Glyphs 2. Could you explain me what could be the issue there? Thanks.

Here is a screenshot of Glyphs 3 macro window: 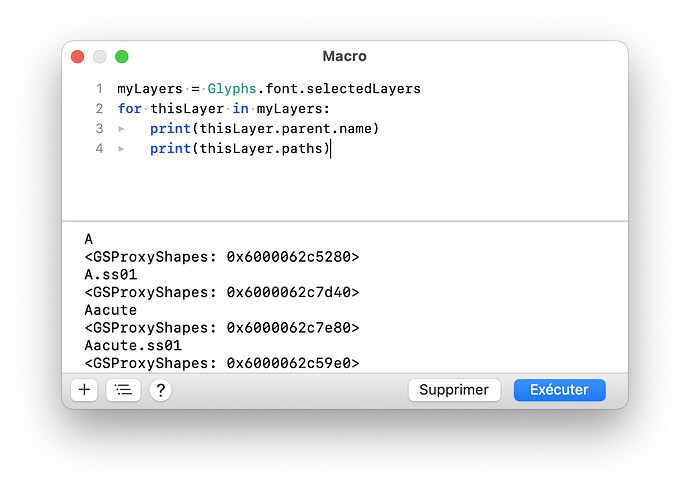 In Glyphs 3, the paths property of a layer can only be iterated but not modified. You can write a for loop that iterates over the paths of layer like so:

This iterates over the paths of the current layer.

To modify the paths of a layer (delete paths, insert new paths) in Glyphs 3, use the shapes property on a layer which contains all paths and components on a layer. You can iterate over the shapes of a layer like so:

Thanks for your quick answer, I will look at this!

Hello,
I’m also starting to learn to script on Glyphs with the same tutorial. Now i’m stuck on part 2 as the result is not updated yet. Can anyone please tell me how the code would look like to have the same results as in Glyphs 2?
Thanks

I need to update those tutorials. I hope I get around to it next week.

@Nicolien can you be more specific: which code are you trying to run that produces no output? I assume you use Glyphs 3.

It is working now thanks to mekkablue and Georg. This is the code: 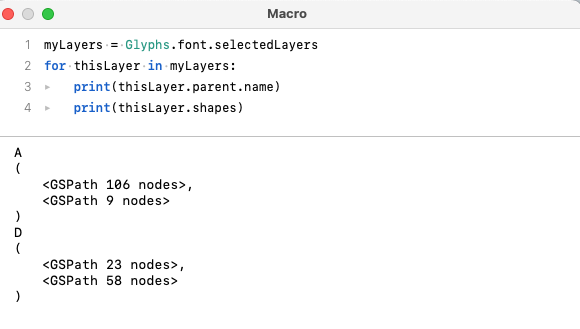